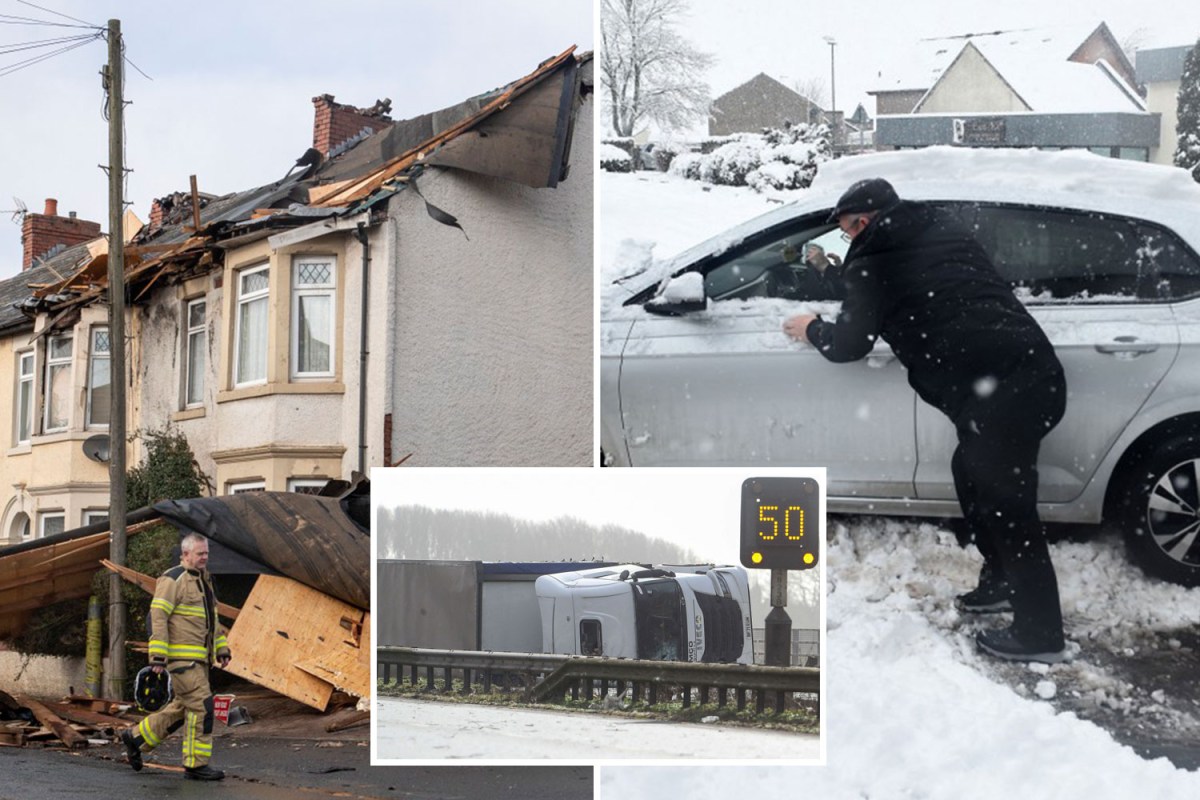 The BRITS are bracing themselves for more weather misery tonight after four people died as 122mph gales ripped across the country during Storm Eunice.

Three more days of weather warnings have been issued after the worst storm in a generation saw rare red alerts in place for the south yesterday.

Eight inches of snow, freezing ice and 80mph gales will now follow in the gust’s wake.

An orange alert for wind in the south ended yesterday at 9 p.m.

Temperatures will drop to -1°C overnight in some areas.

A new yellow warning for the ice is then in place in the vast majority of Scotland and as far as England.

Those on the east coast will miss the icy blast – but residents as far south as Stoke on Trent are warned.

This warning is in place until 9 a.m.

A separate yellow alert for wind is also in place for the south today between 6 a.m. and 6 p.m.

The warning covers South Wales, swaths of the West Country and the entire South Coast.

It will add to the misery of Britons who were among the hardest hit by Eunice, particularly on the Isle of Wight, which has seen the strongest gales.

On Sunday, yellow wind warnings were issued for Scotland and parts of the North West, while a rain alert is in place between Carlisle and Bakewell in Derbyshire.

And on Monday, another yellow wind alert will be applied in Scotland and the North West.

Britain will finally be free of the weather misery at midday that day.

Aidan McGivern of the Met Office said: ‘Unfortunately even wetter and windier weather is expected this weekend, but not on the same scale as Storm Eunice.

As the storm dissipates, a northwest wind will bring showers, sleet, ice and snow northward, he said. The white stuff will also fall in areas of North Wales and the Midlands.

Temperatures will drop as the winds die down.

Saturday will bring a bright and cold start, especially in the north.

In areas further south, the rain will be driven by 60 mph gales during the afternoon.

🔵 Read our weather forecast live blog for the latest updates

Disturbing winds and rain are expected again on Sunday.

Mr McGivern said: “The winds pick up much later in the day.

“There is a risk for northern parts of the country – northern England, Scotland, Northern Ireland – of 50-60mph inland and 70-80mph around exposed coasts and hills. .”

It follows one of Britain’s worst storms in decades.

Tragically, three Britons and an Irishman were reported killed yesterday.

A woman in her 30s, who was a passenger in a car, died in Haringey, London, when a tree fell on the vehicle.

A 30-year-old man who was driving was taken to hospital. His injuries are not believed to be life threatening.

In Hampshire, a man in his 20s was killed and a second man seriously injured when a 10ft tree fell in the market town of Alton.

A man in his 50s died when debris slammed into the windscreen of a car in Merseyside.

And a man in his 60s died in County Wexford when he was crushed by a tree while clearing debris.

Elsewhere, three people have been taken to hospital – one seriously injured – after a tree fell on a car in Wiltshire, while two others were injured in a balcony collapse in London.

Yesterday’s gales would be the highest ever recorded in England, according to the Met Office.

Roads were closed across the country after trees fell on the roadways.

Airports have canceled hundreds of flights, with aviation analysis firm Cirium estimating that more than 400 services have been canceled – just as the mid-term break begins.

The Port of Dover has temporarily closed during the worst weather conditions.

South Western Railway said at least 30 fallen trees were blocking key routes and as a result all services were suspended during the evening.

The two red warnings, which were in effect in southern England and Wales, have now expired, meaning the strongest gusts are over.

It was the first time that London had been covered by such an alert.

Part of the O2’s roof was also ripped off, with staff warning the site could be closed for months.

London firefighters declared a major incident after a wave of 999 calls – with 550 recorded between 10.30am and 1pm, more than the average number usually taken over 24 hours.

The worst-hit region – the Isle of Wight – recorded wind gusts of 122mph this morning.

The gusts there were even stronger than during the Great Storm of 1987 when 18 people were killed.

Meanwhile, more than a million homes were without power yesterday.

While 700,000 properties have now been reconnected by engineers battling the intense conditions, 435,000 households remain in the dark tonight.

The problems could last until next week when the new weather warnings take effect.