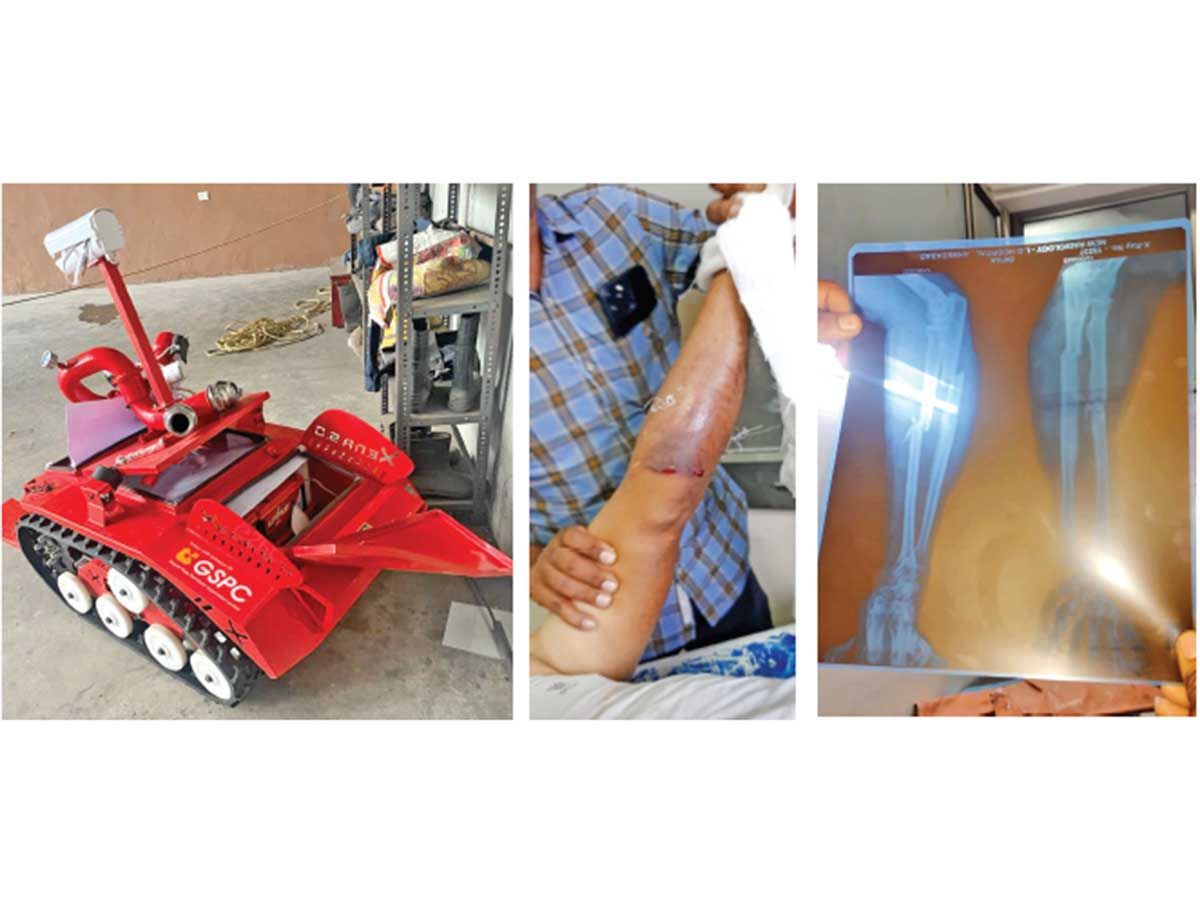 In an incident that scared firefighters in Ahmedabad and worried officials in other major cities, a specialized remote-controlled robot, intended to help firefighters by extinguishing flames, injured a firefighter at a fire station in Ahmedabad during a test on Sunday. Fire robots are designed to reach dangerous and inaccessible places to extinguish flames while allowing firefighters to operate from a safe distance.
During the trial, however, an explosion occurred in one of the robots, injuring a firefighter.

Deepakkumar Parmar, a firefighter assigned to Maninagar Fire Station, had to be rushed to hospital after sustaining injuries from an explosion in equipment which caused shrapnel to hit him by hand. Parmar was admitted to the emergency department of LG Hospital around 5:45 p.m. Doctors diagnosed him with a double fracture in his left forearm.
Dr Mahesh Modale, Assistant Medical Superintendent at LG Hospital, said: ‘The firefighter was admitted to hospital on Sunday evening with a puncture wound. X-ray reports confirmed a double fracture of the left forearm. He is otherwise stable, but surgery is scheduled for Monday.

Only 39 days old robot
Notably, the piece of equipment that caused the explosion was a robotic firefighter donated to the Ahmedabad Fire and Emergency Services (AFES) by Gujarat State Petroleum Corporation (GSPC) under their program of CSR on May 4. The donation was facilitated by the Gujarat CSR Authority. One robot each was donated to the city fire departments of Ahmedabad, Vadodara and Surat.
As soon as the incident happened in Ahmedabad, the officials called their counterparts in Vadodara and Surat to inform them about the incident as they too own each of the new devices.
The machine was kept under load
According to the first information on the accident obtained by Mirror, the robot, which operates on a Lithium-Ion battery, had been kept under electric charge. However, when the firefighter cut off the power supply, there was an explosion, resulting in the injury.
Senior fire officials rushed to Maninagar to investigate the matter. Jayesh Khadia, Chief Fire Officer (CFO) of AFES said: “During a simulated exercise with the new robot offered by the GSPC, an explosion occurred which injured firefighter Parmar. He was admitted to LG Hospital. Meanwhile, a team from the company will be on site to investigate the incident on Monday.

Surat has found shortcomings, Vadodara has not yet been used
The problems with the new firefighting robot are not limited to Ahmedabad. Mirror has learned that the Surat Fire and Emergency Services (SFES) have yet to use the machine in active firefighting operations as they found several shortcomings with it during their trials themselves . Asked about it, Basant Pareek, Chief Fire Officer (CFO) of SFES, said: “We found at least four issues with the robot, including its weight and the fact that the camera is not well placed, which leads to moisture buildup, causing the driver to become blind while in use. We have written to the company about these issues. Parth Brahmbhatt, Chief Financial Officer in charge of Fire and Vadodara Emergency (VFES), said the robot they received from GSPC has not yet been used in an active firefighting operation, but they are concerned about the power of the device and its camera.

High-tech robots cost Rs 1.2 crore each
Each machine costs around Rs 1.2 crore, fire officials said. With the enthronement of this machine last month, the AFES has acquired its third firefighting robot.
However, this particular machine was supposed to be more compact compared to previous models with the AFES. It has an infrared and thermal camera, a self-cooling system, a powerful pump of 3,000 liters per minute and a range of 90 meters. It can also detect human body temperature to help rescue operations.