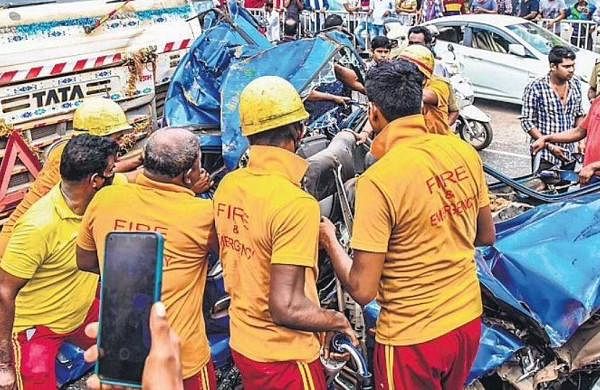 BHUBANESWAR: A government engineer was killed in a freak accident when his stationary car was rammed by a speeding truck near Palasuni Square here on Monday morning. The late Sumanta Das (36) from Aiginia in Bhubaneswar has been posted to Barachana in Jajpur district as Deputy Warden (Electricity). He was on his way to the office when the unfortunate incident happened around 9:10 a.m.

Police said a truck stopped on National Road 16 near Palasuni as people were crossing the road. A car, another truck and Das’s vehicle, which were all in the same lane, also came to a stop. The truck in front coming to a stop, Das stopped his car, but a Hyva truck behind him accelerated and rammed his vehicle. His car was crushed between the two heavy goods vehicles. Das did not survive the impact.

Odisha Fire Department personnel rushed to the scene and recovered her body from the mangled remains of the car. “Box cutters were used to cut up the car and recover his body. The whole operation took about half an hour,” Deputy Fire Officer SK Biswal said.

The entire incident was captured by a CCTV camera installed in a nearby establishment. The truck could be seen crashing into Das’ car, who then rushed into the stationary truck in front of him. The truck was pushed with such force that it hit the car in front. However, those inside the car escaped unscathed even as the vehicle sustained damage.

Traffic on the road between Bhubaneswar and Cuttack Highway came to a standstill for more than an hour after the crash. Normalcy resumed after police and rescue personnel pulled the vehicles off the road.

“The truck driver managed to flee after the accident and efforts are underway to catch him. Further investigation is continuing,” said IIC Police Station, Manchewar, Sudhir Kumar Sahoo. Das leaves survived by his wife and one son.