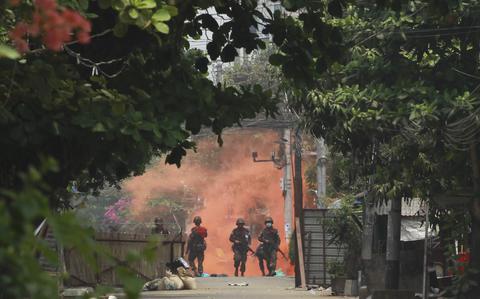 Soldiers march towards anti-coup protesters during a demonstration in Yangon, Myanmar on March 30, 2021. According to information released on Thursday, September 23, 2021, a town in West Chin State in Myanmar was abandoned as government troops and a local resistance group fought each other. (PA)

BANGKOK – A Baptist pastor and three other men were killed and a town of 2,000 homes was all but abandoned over the weekend as fighting in Myanmar’s West Chin state escalated after a call for an uprising national government against the country’s military government, a resident said Thursday.

Saturday’s fighting in Thantlang between government troops and the Chinland Defense Force, a local resistance group, followed more than a week of small skirmishes in which at least two government soldiers were reportedly killed.

Chin State has seen one of the most intense insurgency activities against the army-installed government that seized power in February from the elected administration of Aung San Suu Kyi. Residents of the remote area have a long standing reputation for their fierce fighting spirit.

The Chinland Defense Force said it killed two army soldiers in an ambush on September 9, independent Myanmar media reported. Sporadic fighting was also reported in the area over the following days.

Heavy fighting broke out on September 18, according to the resistance and the government.

An artillery shell set off a fire that destroyed 19 buildings including a newly constructed hotel, said a resident who insisted not to be identified because he feared sanctions from the government.

He said he was told by fellow citizens that Pastor Cung Biak Hum was shot dead by government troops as he tried to help put out the blaze, and that three other men were also reportedly shot dead.

He said about 30 people – 20 boys and several adults – remained in an orphanage on the outskirts of town after most residents fled to nearby villages for safety.

The Burmese media reported similar accounts from other sources.

The government spokesperson, Major-General. Zaw Min Tun blamed the fighting on Chin resistance forces and said the pastor’s death was under investigation.

The Government of National Unity, an opposition organization that seeks to coordinate resistance to the military regime, on September 7 called for a “popular defensive war” to intensify the struggle.

The revolt against the government is fought on two fronts, with acts such as assassinations and bombings occurring in urban areas and more conventional battles in the countryside, although poorly armed rural residents prefer ambush tactics over frontal combat.