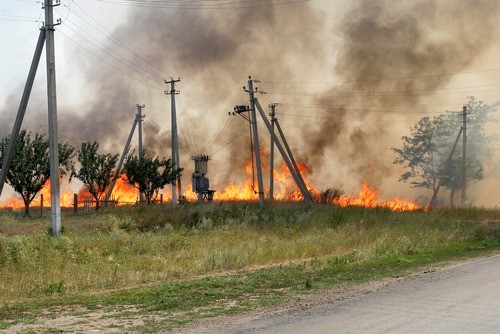 Engineers at Arizona State University have adopted the goal of a new electrical infrastructure monitoring system to protect energy infrastructure from wildfires.

According to a recent United Nations report, the global incidence of extreme fires is expected to increase by 50% by the end of the century. The total area they burn in the United States has increased by an average of nearly 200,000 acres every year for three decades.

The WARM (Wildfire Awareness and Risk Management) system will use the wireless sensors of the Internet of Things to monitor the environment around power transmission equipment in the most remote environments, take this data and use it to push more resilient network operations during times of high wildfire risk. . Power lines and other network equipment often stretch for miles of remote wilderness that can be susceptible to fires and difficult to help due to isolation.

“The relationship between wildfires and the electrical grid is complex,” said Anamitra Pal, assistant professor of electrical engineering at ASU and lead of its WARM research. “Where exactly is a fire in relation to power lines in a remote area? How much of a particular line’s capacity is reduced due to this fire? When is the best time to take a line out of service? Currently, there are fundamental gaps in the sensing capabilities and in the decision-making methods needed to answer these questions.

Combine that with the fact that wildfires now burn an average of nearly 200,000 acres per year in the United States, and it’s cause for serious concern. The National Science Foundation accepted, complementing Pal’s efforts with a $1.5 million prize under its Addressing Systems Challenges through Engineering Teams (ASCENT) program. This money, and more, is being used by the Project WARM team to raise real-time situational awareness and create better strategies and means for fire prevention and rapid response by utility operators, municipal managers and state regulators.

This will mainly take four forms: remote sensing, wireless communication, power system safety analysis, and optimization. Autonomous sensors will be essential for remote areas, according to Pal. It will also take capacity into account.

“Making these devices self-contained means harvesting power from solar cells or coupling to power lines,” said Jennifer Blain Christen, another ASU associate professor of electrical engineering and co-principal investigator of the devices. “But these capacities are not very generous, so we always have to be careful with the energy consumption. Our idea is to implement an innovative and hierarchical sensor system. It will divide the different sensors of each unit into several levels in depending on their power consumption.

The team will continue preventative and corrective decision-making at the operations level to reduce the overall wildfire risk of the network, inform decision-making for fires started by sources beyond the network, and guide the development policies with more preventive and future-oriented decisions.