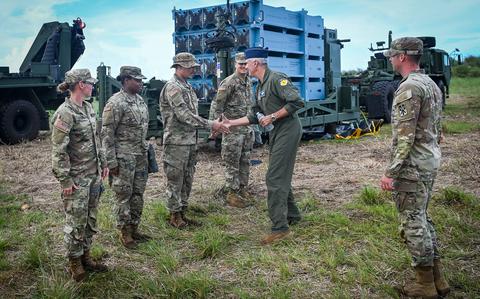 A three-week test of the Iron Dome air defense system at Andersen Air Force Base in Guam was successful, according to the commander of the army task force that conducted the test.

In recent weeks, Texas-based troops and 110 members of Task Force Talon, part of the 38th Air Defense Artillery Brigade, based in Sagamihara, Japan, have trained around the clock to defend the island against aerial simulations. attacks, task force commander Major Kyle Hermanson told Stars and Stripes by telephone on Wednesday.

Iron Dome deployed to Guam with a full arsenal of training missiles, but it did not fire live ammunition, he said.

“We did several simulations between the two units and the command and control element, deployed forward from Japan,” Hermanson said. â€œThe main thing we were trying to get was to test the deployment of the system and its ability to work with a lower and higher level asset. “

â€œWe have validated the ability to fight in a layered defense of Guam,â€ he said.

This is the Army’s latest demonstration of its ability to move air defense systems in the Pacific.

A Patriot battery deployed to Amami Island, southern Japan, during the annual Orient Shield exercise which ran from June 24 to July 9. Also over the summer, 65 soldiers from the 38th Air Defense Artillery Brigade deployed to Australia with a pair of Patriot launchers, a radar, power station, checkpoint, and brigade and battalion command posts. during the Talisman Saber bienniums.

The Iron Dome Battery in Guam is one of two the military purchased last year. The pair cost $ 373 million, part of the $ 1.6 billion the United States has pumped into the program since 2011, according to a May report from the Bloomberg news service.

Israel-based Rafael Advanced Defense Systems developed the system, which U.S. defense contractor Raytheon began co-producing in 2014, according to the report.

Congress mandated in the National Defense Authorization Act 2019 that the system be deployed in a theater of operations by the end of 2021.

Iron Dome has shot down more than 1,500 targets with a success rate of over 90%, according to the Raytheon Missiles & Defense website. Israel has used it successfully on several occasions during the conflicts in Gaza.

The military has not said if Iron Dome could go elsewhere in the Indo-Pacific.

It can be transported by sea or air, said Captain Nicholas Chopp, spokesman for the 94th Army Air and Missile Defense Command at Joint Base Pearl Harbor-Hickam, Hawaii, in a Nov. 16 email.

â€œIron Dome is a rapidly deployable system that can be used in various locations in the Indo-Pacific theater,â€ he said. â€œIn this exercise, our focus is on collecting the kind of data that can inform those decisions. “