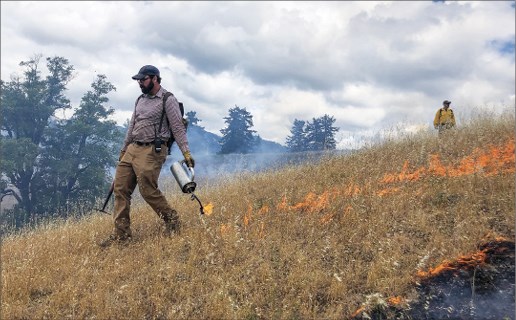 Brad Graevs of the Plumas Underburn Cooperative uses a drip torch to set fire to vegetation in Humboldt County as part of a controlled fire in June organized by the Humboldt County Prepressed Fire Association. Photo/Lenya Quinn-Davidson

March 23, 2022 – SACRAMENTO – With the threat of a destructive wildfire season looming, legislation was advanced today by Sen. Bill Dodd, D-Napa, that would improve wildfire prevention in California through the establishment of a $20 million prescribed fire claims fund.

“Prescribed burning is one of the most effective ways of preventing wildfires, which is why I wrote the law last year to encourage greater use of this proven technique,” Senator Dodd said. “My new bill continues our efforts to encourage greater use of prescribed burning by ensuring that those who practice this proven technique can benefit from some protection against any unforeseen costs. I thank the members of the committee for seeing the value of this proposal.

Prescribed fire, also known as controlled burning, has been used for centuries to clear dry trees and brush that are known to fuel wildfires out of control. It is rare for prescribed fires to go out of bounds and cause damage to neighboring properties. If they do, Senator Dodd’s new bill, Senate Bill 926, would establish a fund to help cover the costs. It is a follow-up to Senate Bill 332, authored by Senator Dodd and signed into law last year, which protects landowners and prescribed fire managers from paying fire suppression expenses to unless they acted with gross negligence.

SB 926 is sponsored by The Nature Conservancy. It was passed by the Senate Natural Resources Committee with overwhelming support.

“Returning beneficial fire to the landscape is critical to both maintaining forest health and reducing the impacts of megafires on our communities,” said Jay Ziegler, director of policy and external affairs at The Nature Conservancy. “SB 926 will establish a prescribed fire claims fund to implement the $20 million included in last year’s budget for this purpose. This measure is essential to reduce the risks and impacts of massive and severe forest fires which are only expected to develop with climate change.

“Reintroducing the ‘good fire’ – prescribed burns – is an important part of building the resilience of our forests and communities to climate change fueled wildfires and drought,” said Michael Wara, director of the Climate and Energy Policy program at Stanford University. “With SB926, Senator Dodd offers a practical route to overcoming one of the major obstacles – the lack of available insurance coverage – that has kept many private prescribed burners on the sidelines and slowed down work that will keep everyone safe. Californians during wildfire season.”

Senator Bill Dodd represents the 3rd Senate District, which includes all or parts of Napa, Solano, Yolo, Sonoma, Contra Costa and Sacramento counties. You can learn more about the district and Senator Dodd at www.sen.ca.gov/dodd.
Source: Senator Bill Dodd