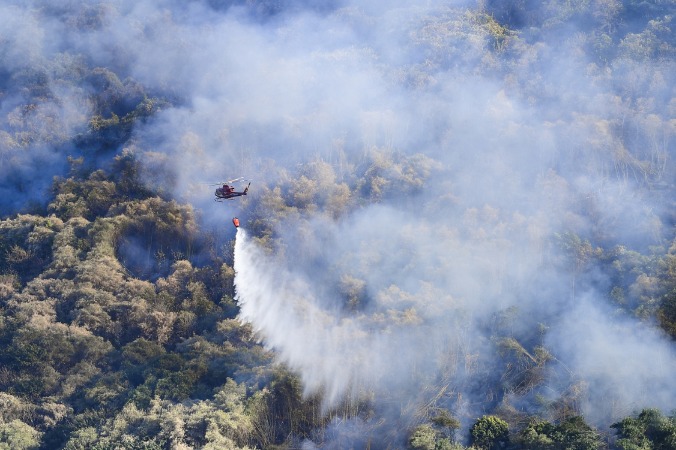 Several large wildfires that have spread since Thursday amid persistent extreme heat and drought have been brought under control by Chongqing firefighters. No casualties were reported.

The fires were scattered across forests in Jiangjin, Dazu, Tongliang and Banan counties in the southwest municipality.

On Sunday evening, many residents of downtown Chongqing posted on social media that they could smell the thick smoke even inside their apartments and spotted tiny burning embers on their balconies. The smoke and embers were thought to be from the wildfire in nearby Banan district, which broke out on Sunday afternoon.

The local government mobilized some 5,000 rescue workers and seven helicopters to put out the fires and evacuated nearly 1,500 people to safety shelters.

According to the rescue team, because the wildfires had started on steep mountain slopes, it was very difficult to put them out, especially in the windy conditions on Sunday.

The Chongqing Daily reported on Monday that the wildfires have been “suppressed successfully” and an investigation into the causes of the blazes is proceeding smoothly.

Known as one of China’s “three stoves” due to its high summer temperatures, Chongqing, a city of more than 31 million people, experienced average summer high temperatures of 37C.

The municipality has been ravaged by its worst heat wave since 1961, when nationwide sighting statistics began. Most parts of the city experienced high temperatures of over 40°C for several weeks, and temperatures soared to 45°C on Thursday. The ongoing heat wave is expected to continue this week.

According to the local water resources bureau, 51 rivers in the city have stopped flowing and 24 reservoirs have dried up.

With scorching heat and lack of rainfall, Chongqing issued a red alert, the highest alert level, for wildfires in most districts and counties from Aug. 16 to 23.

The order said fire prevention is the top priority. Forest managers at all levels should pay attention to nature reserves, state forest farms, tourist attractions and forest parks as well as families living in forests with children and the elderly.

The city has banned all but those who live in the mountains from entering forests in its mountain ranges until August 31. During the ban, the use of fire or any activity that may cause a fire is strictly prohibited.

“Inner-city forest chiefs must resolutely prevent forest fires by all means and with strict organization,” the order said.