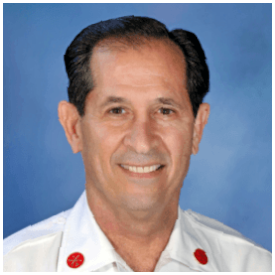 St. Augustine Fire Chief Carlos Aviles told local Historic City News reporters that Chief Fire Officer Bob Growick will retire from the city effective February 22, 2022. Chief Growick has been a 40 year veteran of the fire service and has served as the city fire marshal since August 2, 2013.

In a final announcement before his retirement, Growick was informed by Chief Aviles that he had been named “Fire Warden of the Year 2020” by the Florida Fire Chief Association.

â€œI couldn’t ask for a more professional and dedicated person to lead our fire prevention division. Remarked Chief Aviles. â€œChef Growick’s dedication and professionalism is beyond reproach and reflects the highest standards of the fire department. I am proud of this recognition for Bob, it is well deserved.

Growick also served for three years as the Northeast Regional Director of the Florida Fire Marshals Inspector Association and President of the Northeast Florida Fire Prevention Association. He is an active player in the region and is often requested by his peers for his knowledge and expertise.

Chief Growick was responsible for many successful initiatives including managing the city’s short term rental order and security inspection program as well as a very successful home smoke detector installation program. , which also includes smoke detectors for the hearing impaired.

â€œWhen I started my career as a Fire Marshal, I set a goal for my programs – our motto was Invest in the Future, Work Safe Today,â€ said Growick. â€œI think the programs I’ve created do just that, and I’m sure I’m leaving this department in very capable hands. “

During the pandemic, Growick developed a series of educational fire safety videos to ensure the dissemination of vital public safety information to the public.

In addition, at the time of the awarding of the award, Growick was the sole city plan reviewer, manages the inspection records of over 1,200 companies, conducts all fire investigations and has developed a firefighting program. internal recertification for members of the department who are fire safety inspectors.

Fun fire hose in the sun on Himatangi beach