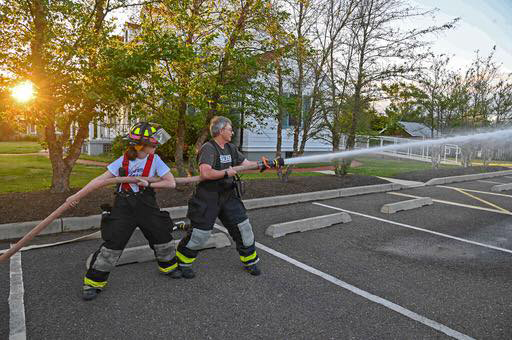 Fire Safety on the Minds of Barnegat Light Taxpayers

The July sizzle provided an opportunity to discuss fire safety and some common — but not always realized by residents — causes of shoreline fires.

The topic of the requested presentation at the July 23 meeting of the Barnegat Light Taxpayers Association was “Fire! Fire! Fire! What can we do to prevent it and what to do if it happens. Barnegat Light Volunteer Fire Co. engineer and building inspector for 22 years, Ed Aras, spoke in the town where towering flames from an April 15 house fire still lingered in homeowners’ minds.

“This subject was suggested to us by a number of residents following the devastating Good Friday house fire,” said BLTA President Rich Brodman, speaking of the three-alarm fire that destroyed the house at 507 Central Ave. Fortunately, the blaze caused no injuries.

Aras began by emphasizing how vital “self-help” is to the all-volunteer teams in the LBI area, as he addressed an audience many of whom come from cities where the teams are paid.

“When I turned around and needed help, while I was running the second engine with another man, we turned around and there were six guys on the street in Surf City who said: ‘What can we do, captain?’ I said I wasn’t the captain, but…we put the fire out in no time, probably about an hour and a half, which wasn’t bad considering the situation.

Staff from the Ocean County Fire Marshal’s Office were “here for 3 1/2 hours after the fire was declared out,” Aras said. “To my knowledge, they have not been able to determine the cause of the fire. I hate to tell you this, but sometimes it happens.

Experts told students that “you don’t always find a cause.”

With that, the stage was set for an overview of causes and reactions.

“Some of the things we seem to forget about are grilling,” Aras began. “I have witnessed a number of these fires in my career; It’s not funny. You’re too close to home. Or you’re too close to the ceiling – “oh, it’s raining outside; we’ll just shove it in the garage.

His answer to this mistaken assumption is “No, no, no, no, no! The heat radiates and rises, and it will start burning down your house before you know it. The vinyl siding will melt in a flash.

He recalled that about two years ago in High Bar Harbor a gas grill fire broke out, ironically a block from where the chef lived. “The grill was against the house. The wind was blowing northwest. And it just radiated heat and destroyed the whole side of the house. I can’t stress enough that you need to keep your fires going,’ he said, also speaking about smokers.

Flammable liquids can be a problem when stored to fuel lawn mowers, weeders and hedge trimmers. Common practice often does not mesh with security practices.

“One of the things they teach you in fire school is called the ‘fire triangle’. A fire triangle is made up of three elements: heat, oxygen and fuel. If you knock one of those things, there is no fire.

The chemicals that carpenters use for finishing are flammable. Aras said they should be kept not only away from a heat source, but also perhaps in a shed in a specially designed cabinet.

This was the part of the conference that led to information about fire extinguishers. Aras said to never hesitate to call 911 in an emergency.

You better call us than try to fight a fire yourself.

But he added that the owner of a fire extinguisher should also know how to use it effectively by reading the instructions or asking questions, just as home fire drills are important.

“If you’re going to use it, keep it close to leaving the house,” Aras added. “Because sometimes a fire can get away from you in a second.”

The recommended technique is to hit the “base of the fire” with the extinguisher. “It knocks him down.”

“If there’s a fire and there’s smoke and whatever, get out,” Aras spoke of an advisory, “and you close the door behind you. Closing the door eliminates some of that air, oxygen from the triangle of fire. Fire runs wherever it wants to go. It knows no boundaries and it will burn anything and everything, including Sheetrock, believe it or not.

In the case of kiln fires, the fuel intensifies the urgency even more.

Smoke detector batteries should be checked as recommended. “If you have the new ones, what you should do is get a stick and go around every month and press the button so you can hear each one of these works.”

“The other thing you should look at is the dryer vent and what’s in there,” Aras posed. An example of Boy Scouts effectively illustrated.

“The best thing we ever had to start a fire, when my son was in the scouts, we used to take this stuffed animal, crayons and wax paper, and we would put that together in a bundle and put it in their backpack. When they wanted to light a fire, they just had to light it, and it goes up like that. You can imagine what these lint will do in your dryer vent.

“The suggestion is that you get someone professional to clean this pipe. If it was installed more than 10 years ago, you might want to consider replacing it,” he added , explaining that older vent sections might have screws inside that could snag lint.

Parking a car in a garage after it has been running can be another hazard, officials say.

“It’s hot and you have all these other things lying around. It takes time for a car to cool down. You better leave it outside,’ he said, a statement that’s more apt today than it was in our parents’ days, when car paint wasn’t as tough. to the elements.

” They are wonderful ; you can’t hear them, but you can definitely see them if there’s a fire. These batteries will burn; there is no doubt.

“I’ve seen pictures and read a number of articles in publications about fires – last year around this time they had a really big article about the fire in a Tesla; it was like three or four years. It took 38,000 gallons of water to put out that fire. They were there for over eight hours. You have to be careful with those cars and their charging units.

A charging outlet should be placed outside the home, not inside, in case of fire, he said. This led to a summary that could relate to many elements of the home: “Maintaining all this equipment is the most important thing to prevent fires.”