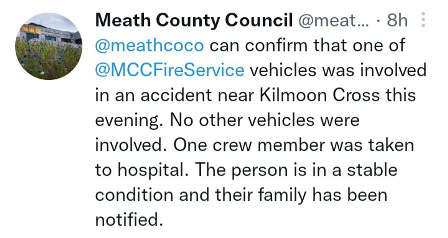 Firefighter taken to hospital after tanker truck overturned on call

A firefighter has been taken to hospital after a tanker truck overturned near Kilmoon Cross last night while responding to a call.

A Meath County Council spokesperson confirmed that no other vehicles were involved and that the crew member who was taken to hospital is in stable condition.

Gardaí says a man in his 40s was taken to Our Lady of Lourdes Hospital following a single vehicle collision in Hawkinstown, Duleek around 7.15pm.

Photos of the badly damaged water carrier were shared in a social media post, but were removed at the request of a fire officer.

In a separate incident, a fire apparatus was involved in a minor collision with a car on the R150 in Kentstown shortly before 7pm.

The occupants of the car – a man in his late teens and a teenager were taken to hospital in Lourdes as a precaution.

No other injuries were reported at the scene.

@meathcoco can confirm that one of @MCCFireService vehicles was involved in an accident near Kilmoon Cross this evening. No other vehicle was involved. A crew member was taken to hospital. The person is in stable condition and his family has been notified.