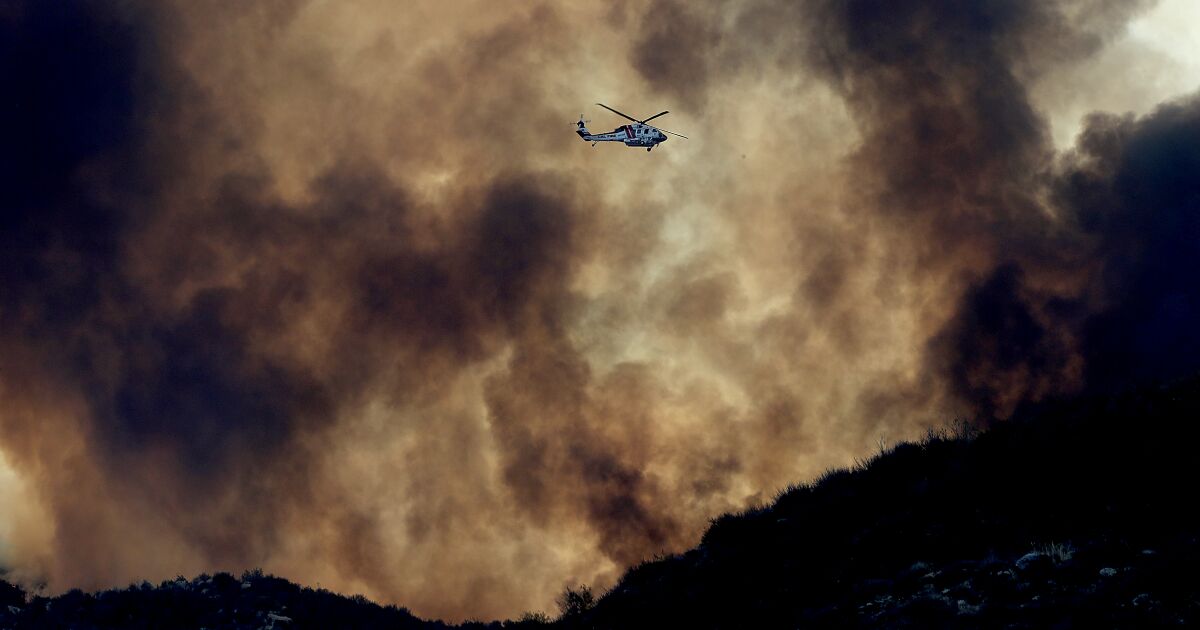 Firefighters battle massive blaze near Hemet from the sky at night

The pilots practiced roaring heavy metal in an outdoor gym near the tarmac, swinging kettlebells and doing push-ups in unusually cool overnight weather brought by the remnants of Tropical Storm Kay.

With the Alabama-Texas football game on the big screen at one end of the low dining room, cooks prepared long platters of bacon-wrapped meatloaf for lunch as the last of the morning’s sausages and eggs were put away.

It was a rare downtime for Chris Renner, a wildfire pilot for the California Department of Forestry and Fire Protection’s Aviation Management Unit. The 40-year-old spent Wednesday and Thursday nights in the cockpit of a ‘Cal Hawk’ – a Cal Fire modified Blackhawk helicopter – picking up 1,000 gallons of water at a time from Diamond Valley Lake and releasing it at about 150 feet above the Fairview fire.

“The first night there was very intense fire activity – 50 foot wisps of fire,” he said. “We were trying to hit the hot spots, slow it down as much as possible. We didn’t want the fire to burn above the ground crew containment lines.

These water drops are a key function of any aerial firefighting operation. But the Fairview fire is one of the first in which Cal Fire has deployed specially trained pilots like Renner to fly at night using night vision goggles, joining other fire departments, like that of Los Angeles, who have fought fires from the skies in darkness for years.

The approach allows for water and retardant drops as pilots follow the fires from above, which provides vital information on fire movement and activity to firefighters on the ground.

“The ability to fly at night has really increased the ability of firefighters working at night” in the field, said Marc Peebles, a public information officer for the US Forest Service. “So just like you see during the day, with all the spectacular water and retardant drops, they’re able to do that at night.”

The aircraft’s primary role is not to put out fires but to support ground crews, said Chance Inwood, flight operations branch director for Cal Fire Team 6.

Still, night runs played a key role in suppressing the Fairview Fire and coordinating resources, such as when they helped stop a cluster of homes and other structures near Hemet from burning down, said Renner.

“One of the houses had bushes burning in its yard. And we – between us and other planes – did about four drops of water on their property,” he said. “But we couldn’t put it out, so we got a hold of a nearby engine by radio and they went and were able to put it out.”

Peebles, who was working from a trailer at Fairview Fire Incident Command on Saturday morning, said flying in the dark with night vision goggles is “very, very dangerous” and only done by specially trained pilots. Still, airdrops were a key tool in the overall approach to firefighting.

“This is a total suppression fire. It means we are going after it with everything we have. We are going to be here for days, maybe weeks,” he said.

Cal Fire spokesman Rob Roseen said the blaze as of Saturday morning had spread to about 28,300 acres and was about 40 percent contained. Two people were killed and at least one person was taken to hospital with injuries, he said, adding the injured victim was expected to survive. Thirteen buildings were destroyed, and four others sustained damage, he said.

He said firefighters expect the blaze to be fully extinguished by Monday. Nearly 1,200 firefighters were deployed to the area.

John Schaures, a tanker pilot for a contractor called Amentum that supplies pilots and mechanics to Cal Fire, said at the height of the Fairview fire he was working 7:45 a.m. shifts At nightfall.

He said he did 60 drops on the massive Riverside County Fire in two days. This was possible, Schaures said, because the airport, home to a Cal Fire base, “is right near” the Fairview fire.

“The fire is only six miles away, so I can get about three to four drops of 1,000 gallon retardant per hour,” he said. “It’s exciting to be up there and it’s a challenge. Every drop is different.

Schaures pulled out a photo on his cellphone that another pilot had taken of an OV-10 Bronco plane over the area affected by the fire. The brush near Hemet is streaked bright red by a retardant, which is dyed so pilots can see where it has already been dropped.

The pilot pointed to a few unidentifiable structures parallel to a deserted stretch of road he had helped protect from the ravages of the fire.

Justin McGough, chief of Cal Fire’s daytime operations branch, said firefighters used planes for about an hour and a half to bring the flames under control Friday “before high winds brought them to a halt.”

The highest winds were recorded in the northeast portion of the containment area in the Oak Cliff and White Post Turn area, McGough said. The southern and southwest quadrants were also “extremely windy” resulting in localized fires outside the containment area, which required the rescue of several residents, he said. declared.

Although conditions have improved, McGough said officials won’t let the rainfall and increased relative humidity “lull us into complacency thinking this fire is out.”

“We are not off the hook here,” he said. “We have a lot of lines open on the south end of this fire and very heavy fuel.”

He encouraged residents of areas under evacuation orders to leave immediately and seek safety.

Cal Fire maintains several aircraft at Hemet-Ryan Airport for deployment throughout the region. But when a major fire like the Fairview fire breaks out, the agency and contractors fly in tankers, planes and helicopters.

The plane remains in place until firefighters determine they are no longer needed. Inwood has determined that night races are no longer necessary and released the drivers who performed them. Renner had therefore returned home to Sacramento on Saturday.

Peebles said the rain stalled flight operations overnight, but its fire-suppressing effect was invaluable as it “altered the behavior of the fire quite a bit” and contributed to the rapid increase in containment since Friday. .

“Time has been our friend,” he said. “The rain came as a slower steady downpour, as opposed to a deluge. … If it had been a deluge, we would have been concerned about flash floods and debris flows in the area. which would have posed a danger to firefighters, but fortunately this did not materialize.

“The concerns of firefighters on the line will focus on scattered showers and possibly thunderstorms,” ​​increasing the risk of flooding, he said. He added that the area is under flood watch until midnight. “Fortunately, the winds will be much less strong today; they will always be out of the east and southeast.