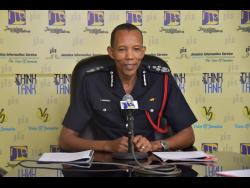 One hundred and fifty years ago, the Jamaica Fire Department was established after the city of Kingston was hit by a series of large fires. The service was officially launched in October 1871 to meet the country’s need for an organized fire department.

The first fire brigade was established under the Kingston and St Andrew’s firefighters act, while others were formed across the country under the parish firefighters act. Until 1988, when the Firefighters Act replaced other laws, Jamaica had 13 separate brigades. These brigades were placed under a central command known as the Jamaica Fire Brigade (JFB) in 1995.

As you might expect, after 150 years a lot has changed about the fire department as it has evolved to meet the needs of the changing Jamaican population. Jamaica Fire Brigade Commissioner Stewart Beckford reflected on the origin of the current service and some of the changes the brigade has undergone.

â€œThe service has evolved from what was then a horse-drawn buggy service to where we now use modern firefighting equipment and some of the latest units you can find anywhere in the world. We have seen the transformation of the service to the point where we now have a fire service equipped and ready to respond to any eventuality, â€said Commissioner Beckford.

He added that the most notable achievement of the service is the transformation it has undergone during its period of existence. This includes offering additional services such as emergency medical services (EMS).

â€œOur EMS service would have been one of those that started in 1996. We started with five sites then, and we are now at nine, with the hope of expanding to other areas at least before the end. of this exercise. We are looking to add two sites in St Ann – Ocho Rios and St Ann’s Bay, â€revealed the JFB official.

The EMS is the arm of the JFB that provides pre-hospital care and ambulance services from the fire stations. The brigade, committed to its mandate to save lives and protect property, has also become more involved in their communities and at all stages of the protection of property and life.

Fire prevention activities also include JFB campaigns such as â€œMek Wi Fix It,â€ which aims to reduce fire-related child deaths and their fire guard clubs in schools. The JFB also organizes training for the public and observes fire drills carried out by schools and businesses.

In 2021, the JFB also celebrated 25 years of commemoration of Fire and Life Safety Awareness Week. During this week, the brigade carries the fire safety message to the public in their homes, schools, businesses and through the media. Community members are engaged in disseminating safe fire practices and fire prevention tips. The JFB has also developed the community bushfire management education program for residents of areas most affected by the fires, such as the farming communities of Mavis Bank, Upper St Andrew, St Elizabeth and many others in across the island.

â€œIn 2015 there was a massive fire at Mavis Bank, and from that JFB invented a program, got sponsors, and we went to educate and train these people. Since then, there has not been a single major fire in this region. These same people are the ones who continue the education process, â€adds Emeleo Ebanks, JFB’s public relations manager.

The Jamaica Fire Brigade has partnered with entities such as the Rural Agricultural Development Authority, the National Environment and Planning Agency, the Jamaica Agricultural Society and the National Land Management Authority. solid waste to teach farmers about alternatives to burning and how to respond to forest fires. They have also distributed backpack pumps to farmers in St Elizabeth to put out small bushfires and are developing a bushfire warning index in collaboration with the Jamaica Weather Service.

The JFB has also modernized its training programs, ensuring that firefighters are kept up to date with the latest techniques, tactics and technologies in medical services, firefighting and rescue. Ebanks explained that to be constantly ready, firefighters are always in training and learning new things such as extrication and extinguishing hybrid vehicles.

“Our modernized training techniques include, but are not limited to, wide angle and confined space rescue, vehicle extrication, fast and calm water rescue, as well as marine firefighting,” Ebanks said.

On top of that, Commissioner Beckford praised the men and women of the brigade and recognized their ingenuity as one of the reasons the JFB is where it is today.

â€œThese men and women find that extra strength and that extra equipment to push those boundaries and keep workingâ€¦. Our firefighters are resourceful. They’ll do unconventional things every now and then just to get the job done because Jamaicans rely on us. We will be creative and do everything in our power to save a life and prevent someone’s property from being destroyed. So commitment, dedication to work, [and] courage – these are some of the characteristics that describe our firefighters today, â€said the Commissioner.

It is this dedication and commitment that motivates firefighters every time they say the firefighters’ prayer and leave their posts to answer an emergency call.

For the 2016-2020 five-year term, the JFB received 62,887 calls, including 5,774 malicious calls from children and adults, which the brigade must nevertheless treat as an emergency. This has strained the brigade’s resources and is a practice the JFB is asking the public to end.

Rather, they invite the public to visit the nearest fire station and learn about the services offered by the brigade.

The Jamaica Fire Brigade currently has over 2,100 officers in its ranks and plans to increase that number in the future. Their 150th anniversary commemoration continues into 2022 with continued modernization as the brigade aims to continue providing world-class service to the island.

From fires to tornadoes, history has shown we need unions to help keep workers safe