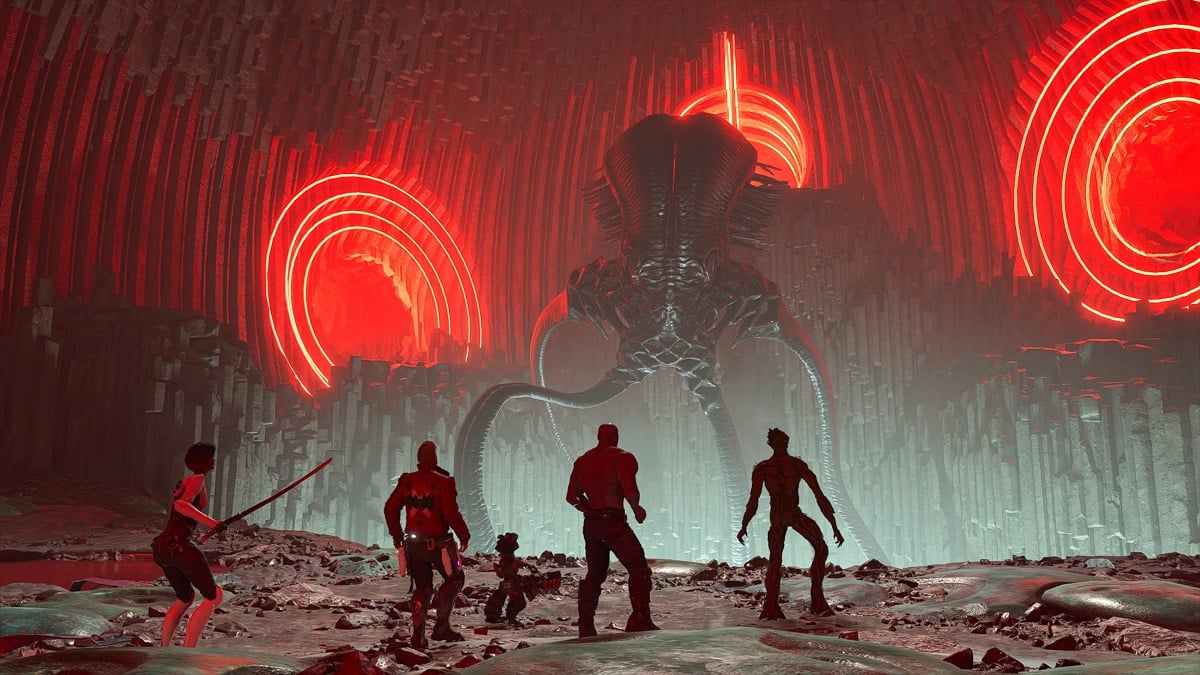 Marvel’s Guardians of the Galaxy deliver sprawling mayhem with its boss fight Dweller-In-Darkness, and some may struggle to deal with the chaos. Luckily, we’re here to solve your problems as you battle this massive monster.

As the Guardians of the Galaxy attempt to escape Lady Hellbender, you are faced with one of her nastier minions, the Dweller-In-Darkness. Its tentacles crash into the ground and can cause trouble for Starlord and his crew.

During the first stage of the battle, watch out for its huge tentacles. Escape them by dodging the path. The other Guardians might not be as attentive, so you may need to revive them quickly. As you dodge, shoot its tentacles at the same time with your automatic pistols.

When the Dweller-In-Darkness brings down both of its limbs, it will be staggered. At this point, orders Groot to keep his arms on the ground. Now is the time to prepare all the movements of your Guardians. Eventually, you’ll see the triangle button (Y on Xbox or X on Switch) appear above the tentacle. This will then trigger a quick event that cuts off one of the monster’s limbs. Follow this step one more time and you will move on to the next step in combat.

Now Lady Hellbender and the Dweller are angry. It will begin to summon the jelly-like monsters to the battlefield. Tentacle attacks will also be faster and more vicious, so dodge them as best you can. The game will describe the danger in red, so keep an eye out.

When the action gets hectic, hold down the left analog stick and press X (A on Xbox and B on Switch) to launch Starlord into the air. You’ll be able to shoot freely as you move away from the chaos below. Equip the ice balls and shoot the jelly with them. They will freeze and you can take them out easily.

Then wait for both tentacles to snap again and use Groot to lock them in place. Damage them enough and you will reactivate the Quick Events, which will now take place in the red rings on the sides of the level. With so much action going on, you’ll likely have a small group at your disposal. Use it to help you take down the Jelly Onslaught and the Dweller himself. If you do this successfully, you will give buffs to the whole team.

With the monster at its last breath, Dweller-in-Darkness rains flames from the sky. Although it sounds bad, Starlord can use it to his advantage. He can cleverly freeze the pool of lava into a boulder for Drax to throw. You’ll know when to do this when the triangle button (Y on Xbox and X on Switch) appears on the screen towards the middle of the platform.

Drax will then automatically throw the boulder towards the belly of the monster. Once enough damage is done, the Dweller will fall to the ground. Just press triangle, Y, or X to end the fight.

Tornado watch issued for the Golden Triangle and Southeast Texas