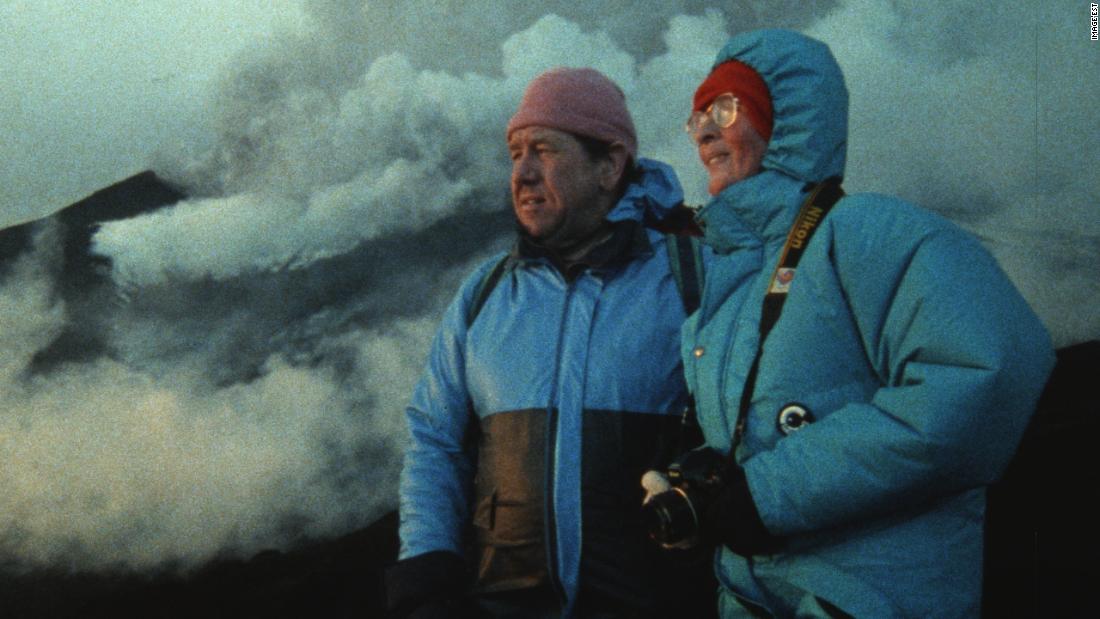 In “Fire of Love”, the story of a couple of scientists’ passion for volcanoes begins with their end

By Joie F. King Last updated Jul 28, 2022
Share
Keep you posted, Cultural Queue is an ongoing series of recommendations for books to read, movies to watch, and podcasts and music to listen to.

How do you tell a story when the last chapter is common knowledge? You start at the end.

“Fire of Love,” Sara Dosa’s moving documentary about husband-and-wife volcanologists Maurice and Katia Krafft, begins June 2, 1991, at Mount Unzen in Japan. The Kraffts, star scientists in their field, are seen in a playful mood in archival footage. But narrator Miranda July quickly pierces that. “Tomorrow will be their last day,” we are told via his voiceover. Unzen would erupt on June 3, killing the Kraffts along with 41 others in a pyroclastic flow. It’s such a definitive ending, there was no choice but to start there.

“We really didn’t want the audience to focus on how Katia and Maurice might die…instead, we hoped people would focus on how they lived,” the director told Sara Sidner in an interview. for CNN’s “Amanpour.”

“It’s a collage film that’s told through…their images, their photographs, their writings, and we wanted audiences to know first and foremost that what they’re watching is (what the Kraffts) left behind in passerby. So we had to acknowledge their death.”

Katia and Maurice Krafft, volcanologists and subjects of the documentary “Fire of Love”. Credit: Image’Est

The film includes excerpts from around 200 hours of footage taken by the couple for their own research and documentaries, as well as media interviews and excerpts from their books.

“Fire of Love” garnered near universal praise from critics, first at sun dance in January and ahead of the film’s release in the US and UK this summer. Armed with a 16mm video camera, French scientists have captured the intimate life of volcanoes from the Democratic Republic of Congo to Colombia to the United States. In vivid hues, rumbles and lava races, the rocks fly, those restless mounds full of sound and fury, grappling with their creative and destructive potential.

Working with editors Erin Casper and Jocelyne Chaput, Dosa harnesses the anthropomorphic qualities of volcano images to illustrate the Kraffts’ relationship to each other and to their subjects. “We like to think of the film as a love triangle between Maurice, Katia and the volcanoes,” she explained.

Katia and Maurice met in the 1960s through their common interest. Their personalities contrasted, Maurice gregarious and carefree, Katia more calm and observant; differences that impacted their fieldwork.

A still from “Fire of Love” featuring Katia and Maurice Krafft during an interview at their home in Alsace, France. Credit: IN A

In one scene, we see Katia unamused as her husband rows through a lake of sulfuric acid (and then faces more than three hours of paddling in a headwind to get back to shore). “It will kill me one day,” Maurice says of his work. Katia often tried to make sure that was not the case, even though she herself was hardly risk averse. In one of the documentary’s many eyebrow-raising scenes, she stands, calm and collected, on the edge of a crater while measuring a temperature of 1,200 Celsius (2,192 Fahrenheit).

Asked to describe their relationship by an interviewer, Maurice quips: “It’s volcanic — we often break out!”

“They had a conflict there,” Dosa said. “They were usually able to reconcile, because they knew it was so important to be in tune with each other, to support each other, if they wanted to pursue their ultimate love, which was close to erupting volcanoes. .”

The Kraffts knew how to leverage their daring activities to gain notoriety and funding to continue their research. their image-making was not a disinterested exercise. But it was to Dosa’s and ours’ benefit that the Kraffts were, in their words, so “fascinated, like a magnet, getting closer and closer” to danger.

“It’s really because of their love and their audacity, to be so close to capture these images, that we now have them in our film,” Dosa said. And although “they really died doing what they loved”, their legacy has saved many more deaths.

Krafft’s pictures of a pyroclastic flow in 1986, for example, was used in an educational video to help governments understand their dangers, the director explained, and a week after the couple died, its lessons were put into practice when Mount Pinatubo erupted in the Philippines. “The video helped save many lives,” Dosa said.

“It’s quite tragic, but poetic.”

“Fire of Love” is in theaters in the US and will be released in the UK on July 29.

Add to Queue: Explorers Pushed to Their Limits

Lily: “Mind over Matter: the epic crossing of the Antarctic continent” (1993)

British explorer Sir Ranulph Fiennes’ bestselling tale of his 1,350-mile crossing of Antarctica with Michael Stroud is a classic for a reason. Relentless, often heartbreaking, Fiennes details the gangrene, starvation and hypothermia they faced, as well as the extreme mental toll of the undertaking. Winston Churchill’s old epigram, “If you’re going through hell, keep going,” comes to mind.

Not all journeys are counted in miles, as Matt Wolf proves in his documentary about eight men and women quarantined inside the Biosphere 2 research facility between 1991 and 1993. The site in Arizona was designed to test if humans could live in deep space inside an enclosed space. eco-friendly system, growing and raising all their own food in a pressure cooker environment. The results were equally fascinating and disturbing.

Look: “The man who descended Everest on skis” (1975)
In 1970, Japanese adventurer and “the godfather of extreme skiing“Yuichiro Miura attempted to descend Mount Everest on skis. He wasn’t alone – Miura’s team consisted of hundreds of porters and tons of equipment. Bruce Nyznik’s Oscar-winning documentary ponders the journey to the mountain and the lost lives quest for greatness.
Look: “In Hell” (2016)

Excerpts from Werner Herzog’s documentary will sound familiar to anyone who’s seen Sara Dosa’s “Fire of Love,” as both contain footage shot by the Kraffts. But the German director’s documentary has a broader focus, exploring active volcanoes from Ethiopia to North Korea with volcanologist Clive Oppenheimer. They are a subject worthy of Herzog’s brand of poetic storytelling.

Lily: “The Lost City of Z: A Tale of Deadly Obsession in the Amazon” (2009)
Journalist David Grann has launched his own expedition trying to uncover the whereabouts of lost explorer Percy Fawcett. The famous Brit disappeared in the Amazon in 1925, fate unknown, and Grann, fearless but not always prepared, enters the rainforest in search of answers in this New York Times bestseller. His investigation weaves together the backstory of Fawcett as well as the explorers who went in search of him. It has been adapted into a wonderful 2016 film by James Gray.