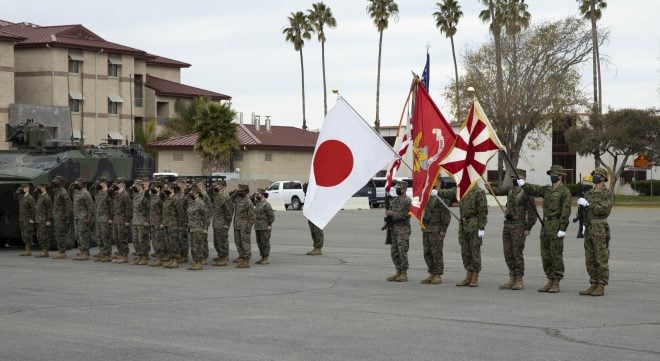 The annual Iron Fist of the Marine Corps, Navy, and Land Self-Defense Force has been held here every year since 2006, but the pandemic forced officials to cancel bilateral training last year.

This year marks the return of approximately 200 members of the 2nd JGSDF Rapid Deployment Amphibious Regiment who participated in 2020. “It’s a smaller footprint this year of troops essential to complete the training mission,” Captain Stephanie Leguizamon, spokesman for the 15th MEU, told USNI News. “Of course, mitigating COVID-19 is a factor.”

Over the next six weeks, they will join the Marines with the 2nd Battalion, 4th Marine Regiment and other Marine Expeditionary Force support units on beaches and beaches for training that will include marksmanship, la amphibious reconnaissance, fire and maneuver assaults, logistics and medical support, and fire support operations, according to the 15th MEU.

The training includes operations with the ACV, which recently resumed water operations after Marine Corps officials lifted restrictions on operations in unprotected waters that were imposed in September 2021 due to a faulty towing. Such training is considered essential for Japan, as it seeks to expand its capabilities to conduct joint amphibious operations as part of its broader maritime defense strategies in the Pacific region, where tensions remain, particularly with China. and North Korea, on contested claims to the islands and territories.

The Rapid Deployment Amphibious Brigade, formed in 2018, is the amphibious component of the Japanese Self-Defense Force. The brigade developed Japan’s amphibious doctrine and training with guidance from the I Marine Expeditionary Force at Camp Pendleton and the III MEF based in Okinawa, Japan.

“Our ability to integrate our armed forces at sea and ashore is critical to the success of this exercise and a hallmark of our long-standing partnership,” said Col. Sean Dynan, who commands the 15th Marine Expeditionary Unit, at the ceremony. opening Monday. in front of the unit’s headquarters at Camp Pendleton.

“For decades, the partnership and trust between the United States and Japan has been crucial in ensuring security around the world. As our adversaries become more assertive and as we navigate the dynamic landscape of competition and conflict, we can rest assured that we are not facing these challenges alone, but hand in hand as allies, ”said Dynan said.

While Marines regularly train with Japanese land and sea forces in and around Japan, including multilateral exercises in the 7th Fleet area, Iron Fist gives visiting JGSDF troops the chance to experience very different environments and use the extensive facilities at Camp Pendleton.

“From ship to shore, this training will focus on the coordination and capabilities required to fully integrate as a combined team. Our ability to regroup and deploy quickly from the sea as a Navy-Navy team and US-Japan combined force takes practice, ”he said. “Over the next month, we will better understand the unique character and capabilities of our units. And we will practice. And in doing so, we will enhance our ability to operate together and ensure that the spirit and character of our partnership continues to flourish. “

Joint US-Japan amphibious training exercises have grown in scale and intensity in recent years since the formation of the ARDB in the United States and the Western Pacific region.

“The United States and Japan share common goals in the Indo-Pacific region such as freedom of navigation, economic prosperity within the rules of international law and the deterrence of aggression,” Lieutenant General George W. Smith, Jr., the I MEF commander, said in a press release. “Exercises like Iron Fist affirm the United States’ commitment to our allies and our strategic objectives. “