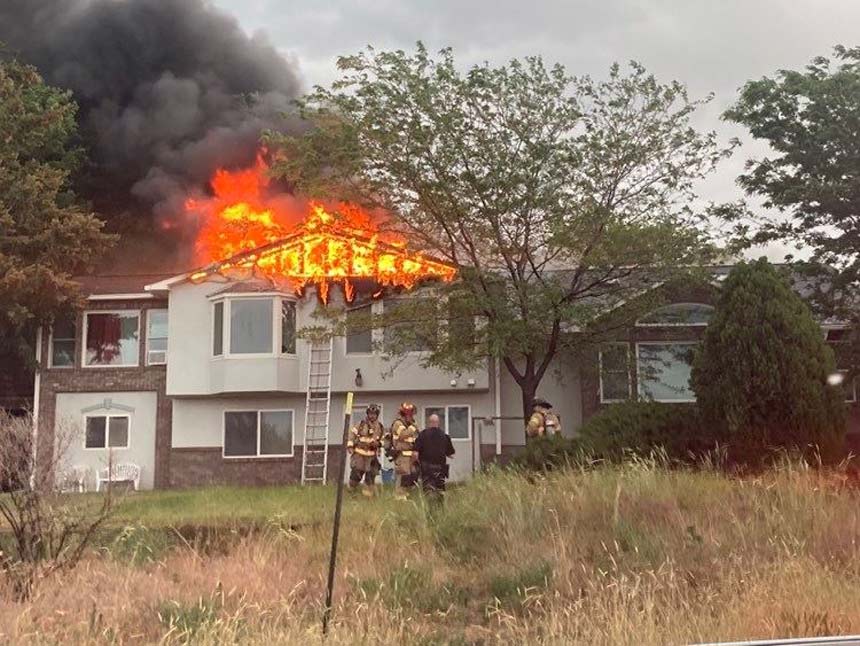 The following is a press release and photo from the City of Idaho Falls.

IONA – Shortly after 5:30 p.m. on July 2, the Idaho Falls Fire Department and Bonneville County Sheriff’s Office were dispatched to the 6000 block of East Panorama Drive in Bonneville County after an individual saw smoke coming out of the top of a house and called the Bonneville/Idaho Falls County Dispatch Center.

A severe thunderstorm warning north of Blackfoot to Rigby was issued by the US National Weather Service in Pocatello just after 5 p.m. During the fire investigation, one individual reported witnessing a lightning strike near the house.

None of the occupants were home when the fire broke out. All of the pets, except for two cats, fled the house without injury before help arrived. The two cats were later found by firefighters safely inside the garage after the fire was extinguished.

Upon arrival, firefighters reported a fire in a large two-story house with a walk-out basement. There was heavy smoke and flames coming from the roof. Firefighters quickly entered and began pulling ceilings to gain access to the fire, while using hoses to fight the fire from inside the house, while others attacked the fire from outside.

The wind, construction features and the way the structure was positioned made it difficult to fight the fire. At around 6:30 p.m., firefighters changed their offensive interior strategy to a temporary defensive exterior strategy while elements of the roof failed due to the fire burning in the attic. They then returned to the interior offensive as conditions improved with the application of exterior water.

The house was a multi-level house with several rooms, totaling approximately 5,000 square feet. The fire scorched both the second story roof and the lower level roof, spreading to the attic and all rooms on both levels before being knocked down around 6:40 p.m. The basement suffered extensive water and smoke damage.

No civilians were injured. A firefighter was taken to hospital with minor injuries where he was later treated and released.

A fire investigator from the IFFD Fire Prevention Division responded and officially determined that the cause of the fire was lightning. Damage was estimated at around $600,000 for the structure and $200,000 for the contents inside the house.

Operating personnel remained on site for several hours to ensure the fire was completely extinguished and there were no hot spots. The Idaho Law Enforcement Chaplaincy responded to the scene to provide assistance to those displaced by the fire as the home is uninhabitable. The Red Cross has also been notified.