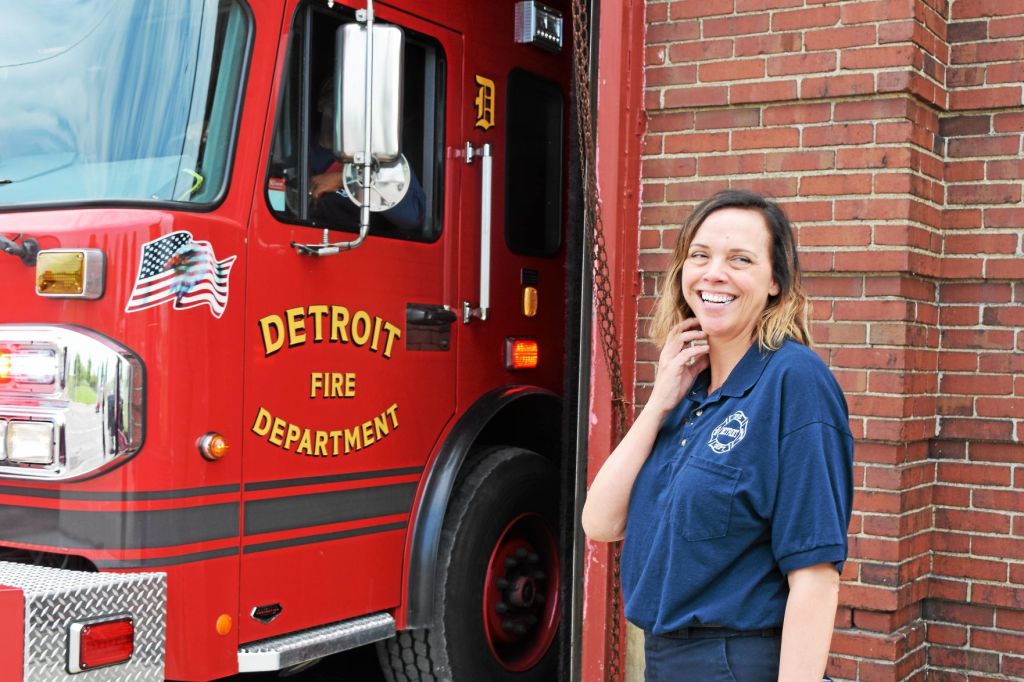 Police and firefighters make difficult decisions every day. Among the most challenging, but perhaps most enjoyable, is selecting nominees for the annual Women in Blue Woman of the Year and Detroit Fire Department Woman of the Year awards.

Each candidate embodies the values ​​of his department.

Finalists chosen for their professionalism, respect, integrity and dedication this year will be honored at the 9th Annual Women in Blue Celebration at MGM Grand Detroit on May 25, hosted by the Detroit Public Safety Foundation.

Among the nominees celebrated for their work are three Macomb County women, including Clinton Township Lt. Shannon Moran, senior firefighter for the Detroit Fire Department.

According to the National Fire Protection Association, only 7% of women are firefighters nationwide and Moran is among those trying to increase the numbers by example and by talking to young women about her career.

It was his grandfather who sparked his passion for firefighting. In her youth, she was captivated by her stories of her glory days as a firefighter and head of the DFD. Some of them had to do with fighting fires and saving lives, but ask any firefighter and they’ll tell you the most beloved stories about the camaraderie they foster between men and women. with whom they serve.

Moran is a member of the Regina High School Class of 1989. It was after high school that she followed her grandfather’s boots.

“It took me four years,” Moran said in an earlier report. “Then I finally understood.”

Once hired, Moran worked her way as a firefighter for Detroit Engine 50 and Ladder 23. It is one of the busiest fire stations in the nation and on one occasion Moran and her fellow firefighters fought 17 fires.

Now she’s at Engine 41 where she not only served as a firefighter for 24 years, but is the first woman elected as a director of the Detroit Firemen’s Fund Association in its 150-year history.

Lt. Mary Moates of Roseville, a member of the DFD since 2004 and an emergency medical technician since 1996, is also nominated for her work as a DFD.

His first priority as a firefighter was to respond to calls for help and then dispatch his service to their location.

Her communication skills eventually led her to be promoted to Sergeant and then Lieutenant in the Communications Division.

“Lieutenant. Moates prides itself on doing its job to the highest possible standards, dispatching accurate information and crews in record time, and getting additional resources on-site if needed,” said one of its superiors in a statement. “Throughout her career with the department, she has maintained her EMT license and is always advancing her training and knowledge.”

Her support system includes her husband, who is also an EMT for the DFD EMS division, and her brother, who is also a firefighter and paramedic with DFD.

In addition to serving her community, she is a role model for other young women, including three daughters, one of whom attended Macomb Community College the same year she decided to return to school to graduate. Associate in Applied Science and Information Technology. She also has a daughter with Asperger’s syndrome and works to raise awareness about this and other autism spectrum disorders.

“Lieutenant. Mary Moates is a selfless leader who works tirelessly to support those around her,” her superior told DPD. “We are proud to recognize hre as a nominee for the DFD Woman of the Year Award.”

As the population of female firefighters continues to grow, New Haven Lt. Wendy Collier is one of more than a dozen police officers up for this year’s Women in Blue award.

Collier is currently the officer in charge of secondary employment, which is a partnership program in which local businesses hire off-duty police officers.

She also facilitated an advisory board to help better understand the needs of business partners and secondary employment program agents.

She is expected to graduate with her master’s degree in strategic leadership in May.

During her 22-year career, she has worked in various fields, including a Patrol Sergeant for the 10th and 11th Precincts as well as a Community Relations and Compliance Liaison Sergeant for the 9th Precinct. She worked at the Real Time Crime Center, helping manage Project Green Light and overseeing investigations and data mining. While in these positions, Collier was instrumental in the development of several departmental and community projects, including the Neighborhood Constable Program, the Project Green Light crime prevention program, and running the Children in Trauma Intervention camp. (ISIC). To top it all off, she helped plan the DPD’s 150th anniversary ball.

Among her deserved accolades are DPD’s Community Outreach Leadership Award and Detroit City Council’s Spirit of Detroit Award, which she received in 2004. And while her duties are rooted in Detroit, she has also served her community as executive director of the New Haven Community Enrichment Committee. and Chairman of the New Haven Parks and Recreation Committee (2016-2019).

“Lieutenant. Collier has worked hard his entire career to improve the Detroit Police Department for the citizens of Detroit,” his commanding officer said. “For her service, we are proud to recognize her as the Women in Blue Officer of the Year nominee.”

The DFD and DPD award winners will be announced at the celebration breakfast hosted by the Detroit Public Safety Foundation on May 25.

For a full list of nominees and final results, visit detroitpublicsafety.org/.