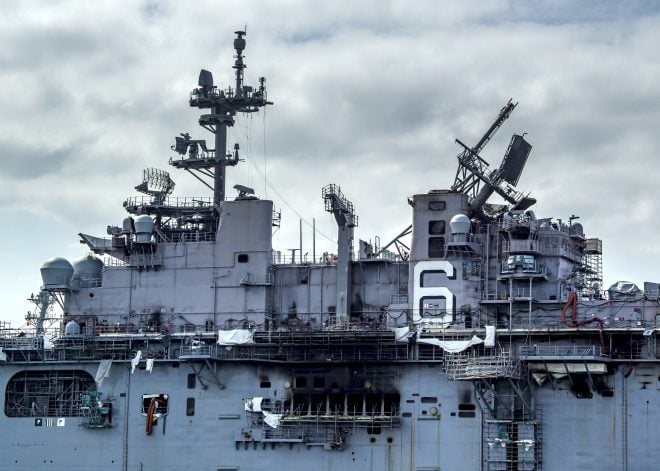 A young sailor will stand trial at a general court-martial for intentionally starting a fire that escalated into a 2020 raging fire that burned down the former USS Bonhomme Richard (LHD-6) for days, the Navy announced Friday.

US 3rd Fleet Commander Vice Admiral Stephen Koehler on Wednesday formally referred two charges – arson and vehicle endangerment – ​​against Seaman Recruit Ryan Mays to a general court-martial “after a review careful of the preliminary hearing report,” Fleet spokesperson. Cmdt. Sean Robertson said in a statement. “Charges were brought in response to evidence found during the criminal investigation into the fire that broke out” on July 12, 2020, aboard the Bonhomme Richard, which the Navy had originally planned to repair but later decided to remove from inventory.

Mays, 22, received a notice of arraignment Friday morning, according to the indictment, a copy of which 3rd Fleet was released to USNI News.

The junior sailor had been confined for nearly two months in 2020 after investigators focused on him as a suspect after several sailors aboard the ship told the Navy and US officers of alcohol, tobacco , firearms and explosives they had spotted Mays in a vehicle deck area before the fire broke out that morning. But the 3rd Fleet, then led by Vice Admiral Scott Conn, filed no charges before releasing Mays, who was confined from Aug. 20 to Oct. 14, 2020, the sailor’s civilian attorney told USNI News.

Koehler, who took command of the 3rd Fleet in June 2021, filed suit against Mays a month later.

At a preliminary Section 32 hearing held in December at Naval Base San Diego, two sailors testified that they saw someone they believed to be Mays in the area before the fire was reported. .

But in his recommendations to the 3rd Fleet, Hearing Officer Captain Angela Tang “felt the evidence was not strong enough” for a court martial, said Gary Barthel, a civilian attorney representing Mays.

“She recommended that the charges not go to trial, giving the issues with the government’s case,” Barthel said.

“The Navy is not seeking justice in this case,” added Barthel, a retired Marine Corps judge advocate now in private practice in the San Diego area. “They’re just looking for a scapegoat.”

Bonhomme Richard was one of four large-deck amphibious vessels on the West Coast when a fire broke out in the lower deck of the vehicles. The ship and crew were in the final days of a $249 million maintenance readiness and upgrades that included support for the new F-35B Lightning II Joint Strike Fighter, and part of the company of the ship this weekend had begun to return to the ship from a berthing barge.

But the initial fire quickly spread through boxes, equipment, vehicles and other assorted objects. Unhindered by a malfunctioning onboard fire-fighting system, the fire moved freely to other decks through ventilation ducts and open ramps which further fueled the flames. It took about an hour before a fire crew from the San Diego Fire Department put the first water hoses on the flames, but the fires erupted again and forced all crew to abandon ship for the pier.

It took four days before a joint federal fire rescue attack brought the blaze under control, and even more days before the hot spots and fires were finally extinguished.

A thorough investigation into the cause of the fire, overseen by Conn and published in October 2021, raised suspicions that it was deliberately started, but also detailed a long chain of failures that led to an unprepared crew fighting properly. the fire, inter-agency bickers over firefighting response, insufficient training and oversight, and other issues of concern.

Conn identified 36 people who contributed to the ship’s loss of $2 billion, including the ship’s management triad, who were fired after the incident. Admiral Sam Paparo, the commander of US Pacific Command, oversaw the administrative actions and sanctions against these individuals.

Four large-deck amphibians remain at home in San Diego and available to support Marine Corps units with the West Coast-based Marine Expeditionary Force following the arrival of the USS in September 2020 Tripoli (LHA-7).