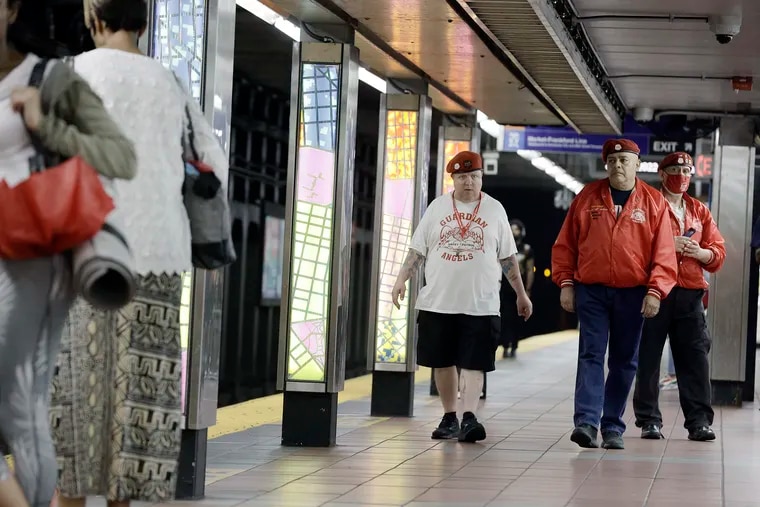 You might see a group of men patrolling downtown streets and subway stations, offering to help people. Their uniforms consist of red berets and white t-shirts emblazoned with the all-seeing Eye of Providence – a symbol believed to suggest that they seek the common good.

They are not law enforcement. They are the Guardian Angels, an unarmed civilian group whose mission is to deter crime.

But after three months of cruising the streets of Philadelphia, some critics and law enforcement officials fear their tactics are going overboard.

A nonprofit organization started in New York City in 1979 by recent Republican mayoral candidate Curtis Sliwa, the Angels created neighborhood safety patrols to help residents amid rising crime and a reduced police presence. Dozens of local chapters wearing berets have sprung up in other cities.

“On every patrol, I go hours without seeing the police,” said Cahill, 43. “Citizens love us – women, children, old people, gays, straights, from all walks of life.”

Cahill and his troupe usually hang out at events like last month’s Italian Market Festival or do security sweeps along the El line or Broad Street.

But on two recent occasions, Cahill bragged on Facebook about confiscating “drugs” from homeless people in the city center, posting a photo of someone on social media.

“Thanks to the Guardian Angels of Philadelphia, this guy and his friends are out of their stash of illegal drugs!” Cahill wrote, accusing the man of bullying people into giving him money.

The posts have drawn ire from residents and recovery advocates, who have criticized Cahill for creating more problems than he solves. The Philadelphia Police Department said confiscating other people’s property is not only dangerous, but “could also potentially be a crime in itself.”

“The PPD does not condone, promote or encourage vigilantism in any form,” said Cpl. Jasmine Reilly, spokesperson for the department. “While we support people who take an active role in keeping their communities safe in a variety of ways, the best and safest way to do so is to be a good witness and report illegal activity to the police department. “

District Attorney Larry Krasner’s office echoed those sentiments, as did the SEPTA Transit Police. Authorities were unaware of any formal complaints filed against Cahill or members of the group.

In an interview, Cahill said he didn’t search anyone. He took sachets of what he believed to be drugs from the ground next to individuals injecting within sight of downtown strollers, he said. He called the police, but no one came, so he took the stuff to the 9th District station where an officer told him to “throw it in the nearest dumpster.”

Cahill worked in the restaurant industry before sustaining injuries that put him out of work, he said. Now he volunteers full-time for the Angels, patrolling five days a week and attending community events to recruit members. The national chapter provides funds for uniforms and other incidentals, but he said there was no money for him.

“Just to make people feel safer – that’s a payment in itself,” he said.

In New York, most of the group’s activities are community-oriented, but the guardian angels have danced with controversy. Last year, a member resigned from the group after cellphone video showed him brawling with two New York City subway riders.

NYPD leaders have sometimes referred to the group as “paramilitaries” and urged them to stay home. But other New York police officials and mayors have been friendlier to the Angels, who say residents appreciate their presence on the streets.

Cahill said the group is responding to founder Sliwa, who did not return requests for comment. He ignores criticism from locals who accuse him of preying on vulnerable people.

Nicole Canale, a Philadelphia-area recovery advocate who lost her brother to an overdose, said she asked Cahill to be more proactive in helping people with addictions, like carrying Narcan that reverses overdose or connecting people to social services.

“These people could do great things,” Canale said. “I just think they need to branch out and work on building the community they’re trying to serve.”

Jose Marco, an organizer for ACT UP and the Philadelphia Overdose Prevention Network, wanted Cahill to take his patrols to Kensington to try to curb gun violence and drug trafficking. Cahill said he wouldn’t.

“This guy is coming from northeast Philadelphia to downtown to take what he says is drugs from black homeless people – that’s a cowardly move,” Marco said. “It’s disgusting.”

The police are trying to strengthen their own patrols.

The police shortage stems from dwindling recruitment, a spike in retirements and some officers abusing disability benefits. SEPTA spokesman Andrew Busch said recruiting and attrition has reduced the transit force from 230 to 210 officers, but noted that SEPTA recently put in place a fleet of 80 outreach specialists to offer help and deter crime. (They are not authorized to detain people or confiscate property.)

“We wouldn’t want anyone outside of law enforcement to find themselves in a situation like this,” Busch said, of Cahill’s practice.

Cahill himself brushed the law, according to court records.

He was probated for an incident involving a stolen car in 1999, which he called a childhood mistake, and received a summary offense for criminal mischief in 2015 after saying a neighbor had him accused of having punctured the tire of his car.

Cahill was arrested in June 2020 for pepper spraying people he believed were throwing rocks at him during the violent Marconi Plaza protests in South Philadelphia. He said he was acting in self-defense. He was found not guilty of the assault charges, but cited for disorderly conduct.

“If I didn’t have this pepper spray, I was going to be killed,” he said. “The fact that I’m waiting to be hit with stones five times shows how restrained I am.”

A million gallons of water, a three-day battle failed to extinguish a department store fire