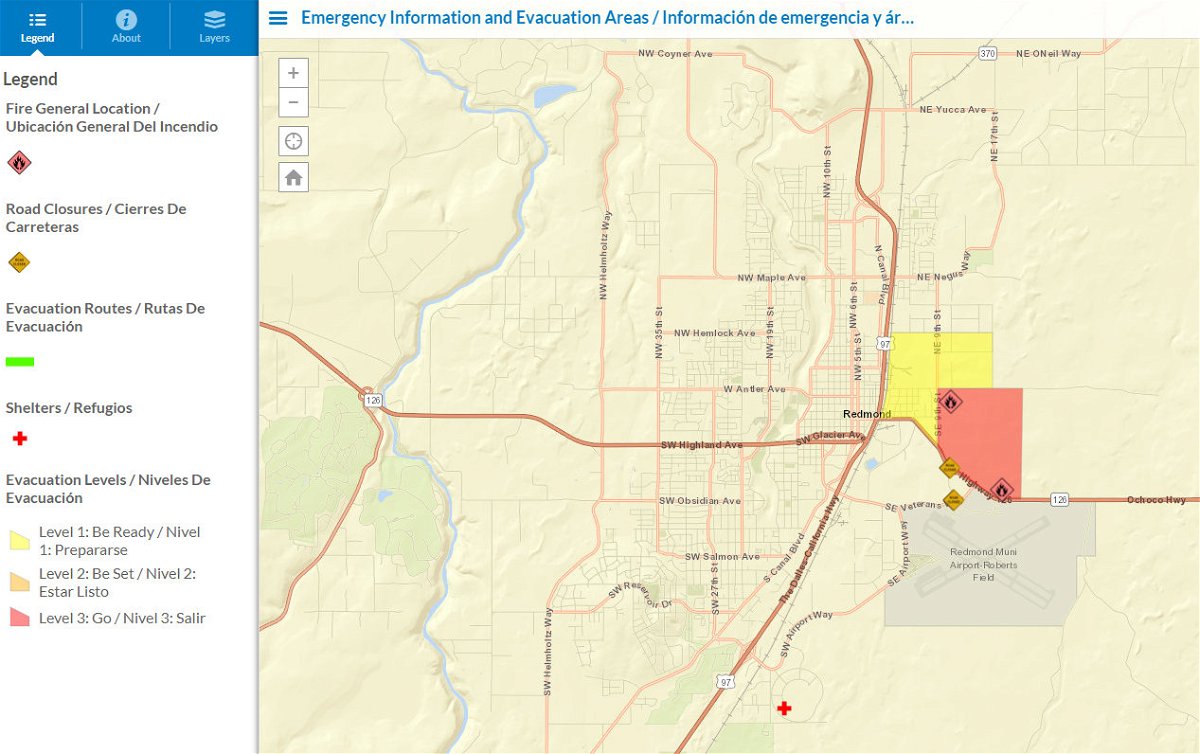 REDMOND, Ore. (KTVZ) – A fast-spreading wildfire started early Tuesday afternoon in southeast Redmond and may have started a second larger blaze, emitting thick smoke, closing the road 126 and prompting large evacuations and the call of several task forces, as well as the closure of Redmond airport for several hours, officials said.

The first fire, called the Antler Fire, was reported shortly after noon in the area of ​​Southeast Ninth Street and Route 126, as temperatures in the area again rose to around 100 degrees and more fires broke out. claimed in many places.

The first fire southeast of Redmond, Incident 419, was estimated to be 20 acres within an hour of being reported, with a task force made up of engine crews from the Forest Service, BLM and Department of Oregon Forest Supporting Redmond Fire, Forest Service public affairs officer Kassidy Kern mentioned.

There were soon two fires, one, the Antler Fire by Ninth Street and Evergreen Avenue, and a new fire, Incident 422, north of the Redmond Air Center, where Forest Service firefighters work and tankers load fuel. fuel and the retarder.

Erratic winds caused Incident 422, just north of the Redmond Air Center, and a heavy tanker was ordered to drop a retarder and help crews stop the fire on Route 126. Des Water drop helicopters were working to cool the hot spots. Originally estimated at 200 acres, authorities on Tuesday evening reduced the estimated size of the blaze to 50-100 acres.

Shortly after 3pm, this word came: “Due to adjacent fire activity, Redmond Municipal Airport is CLOSED until further notice. Flights were diverted to other airports. City manager Keith Witcosky told councilors on Tuesday evening that the airport had reopened.

By mid-afternoon, the evacuation area had expanded south of Route 126 to include the area east of SE Lake Rd to Veterans Way to SE Sisters Ave. to route 126.

Redmond Mayor George Endicott said: “The wind is blowing, which is obviously one of the worst things you can have added to that 110 (degree) head. It creates a terrible situation.”

Two locals were getting ready, in case they had to leave.

Eric Gibb said: “We have the sprinklers. We try to be as defensible as possible, but they say we have to get out of here, so we try to pack our bags and be ready.”

Jed Grieninger said: “I’m going to stay as long as I can, but if it gets too close – I’m not a firefighter, then I’ll kick rocks when I have to. But I hope the men and the women who fight it take care of it. “

Due to the nearby fire “and out of caution”, the COCC announced late Tuesday afternoon that it was evacuating and closing its Redmond campus, until further notice.

In the evening, access to Hwy 126 eastbound was closed to Hwy 97 and Northeast Ninth Street was closed from Hwy 126 to Hemlock Avenue.

One lane on Route 126 reopened at 6 p.m., with ODOT signaling alternate directions, and other streets in the area reopened. Route 126 fully reopened shortly before nightfall.

An interactive map of Deschutes County evacuation zones can be found at:

Late Tuesday evening, the fire evacuation map was updated to reflect level 3 (Go) only in the immediate area of ​​the fire, with other areas to the west and north being reduced to level 1 (Be prepared). The area north of NE Hemlock Avenue was no longer in the evacuation zone.

At around 1:30 p.m., the city of Redmond posted on Facebook:

The following areas are required to evacuate:

The following areas are subject to an evacuation notice:

The following streets have been closed:

The teams are on site and are working to contain the fire. The cause of the fire has not yet been determined. “

By mid-afternoon, the fire evacuation area widened north to Hemlock Avenue. The initial fire has been contained, city ​​officials said, but the second, larger fire spread north from Route 126.

The pet evacuation team said they had been called by the BrightSide Animal Center to help evacuate the shelter. The volunteers showed up with boxes and successfully emptied the shelter.

The winds caused big problems with point fires on another day of over 100 degrees.

ODOT reported mid-afternoon that Route 126 was closed at Mile 2, and earlier said SE Evergreen Avenue and Ninth Street were closed to Route 126 and requested alternate routes. Follow traffic updates on our TripCheck page.

Red Cross volunteers were assisting Deschutes County officials at a temporary evacuation point at the County Fairgrounds. People affected by the fire could go there for help.

Numerous more bushfires broke out in the region on Tuesday’s third consecutive day of record heat.

West of Bend, crews stopped a vehicle fire that had started to spread through the brush on Tuesday afternoon and closed Century Drive for a time in front of Widgi Creek Golf Course.

And by mid-afternoon, crews were responding to a new start, Incident 423, east of Meissner Sno-Park in Deschutes National Forest. The Lava Butte Lookout estimated the fire initially at half an acre. Three engine teams, a hand team and a bulldozer headed to attack it. Officials said the fire was lined in the early evening over 1.6 acres, with a pipe around it and cleanup work was underway with crews expected to continue working through the night.

West of Prineville, residents of the Peacock Walk of the O’Neil Freeway have been ordered to evacuate due to a wildfire, closing the freeway at Elliott Lane and also bringing level notices 2 for the top of Century Drive. All evacuations were lifted at 7 p.m.

Bend Fire and Rescue said it also responded to several fires on Tuesday in extremely hot conditions, one started by a hot lawnmower over vegetation, another by a drag chain from a vehicle and a third when a decorative light ignited bark mulch and a fence.

“Thanks to the quick actions of the spectators, the Bend Fire crews were able to put out all of these fires before they got worse,” said spokesperson Trish Connolly. “The heat will continue through the weekend, as will our extreme fire conditions. We need everyone to be as diligent as possible, to reduce new fires.”

Meanwhile, just outside La Pine, firefighters have stopped a blaze over half an acre near Finley Butte Road and Darlene Way; the crews continued to clean up into the night.

The first crew on site, assisted by two water tankers, launched a swift attack, with 1,400 feet of progressive hoses, holding the fire to half an acre, he said.

With La Pine fire crews participating in a Redmond Fire Task Force, the Central Oregon Fire Department (Oregon Forest Service and Forestry Department) dispatched several engines and a crew. emergency aid to help with cleaning. The cause of the fire is under investigation, Supkis said.