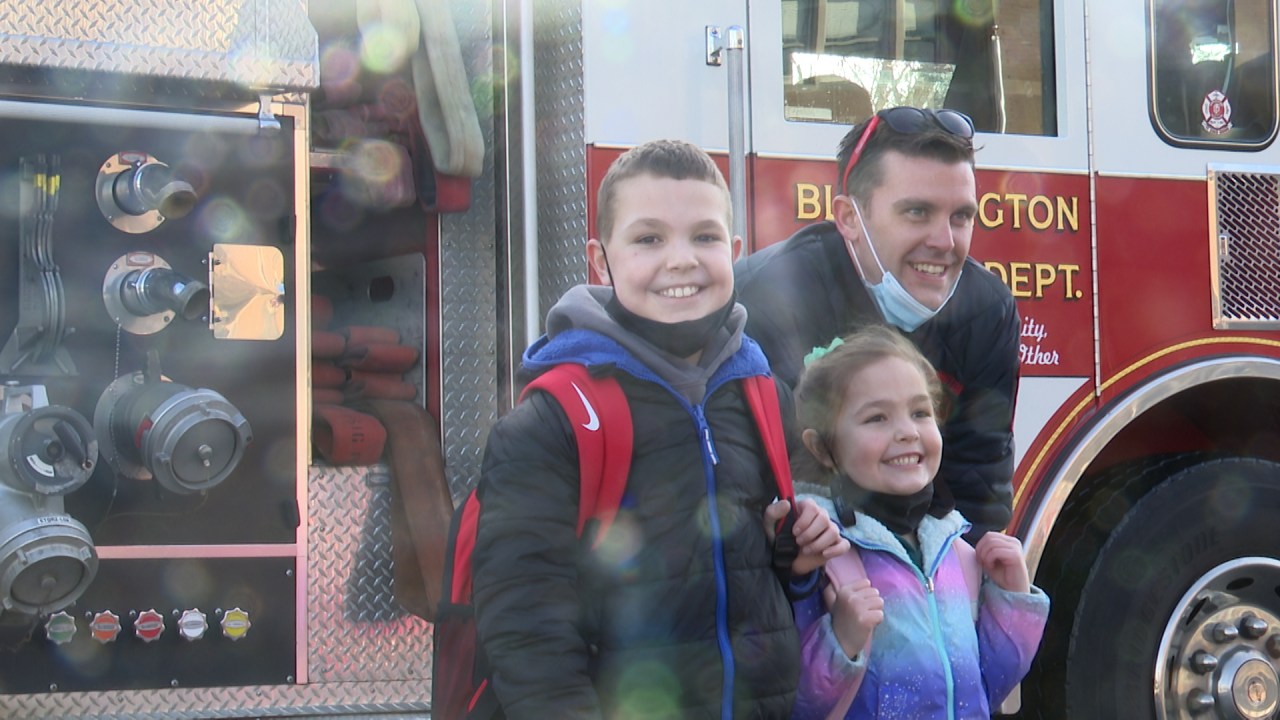 Kindergartener Bennett and his sister at McLean County Unit 5 Cedar Ridge Elementary School and Karli and her brother from Washington Elementary School District 87 arrived at their schools in a fire truck courtesy of the Bloomington Fire Department.

Surveys were sent home to kindergarten families in both districts. Once the teachers received the surveys, they sent them to the fire department.

A student from the class with the highest return percentage was randomly selected for the experiment.

“We talked about the smoke detectors, and then they picked a ticket, and I was the winner,” McGee told WMBD reporters on Wednesday.

Surveys were sent home in October as part of Fire Prevention Week, according to public information officer Eric Davison. He said the contest was part of the Bloomington Fire Department’s mission to teach fire safety and prevention.

“All were sent home with a questionnaire to their parents that only asked a few simple questions; do you have working smoke alarms, would you like to be contacted about installing smoke alarms if you don’t have one,” Davison said.

Davison said the “in-house” field trips were an adaptation to COVID-19, where firefighters came to schools instead of children coming to fire stations. In October, the children were taught the basics of fire prevention and were shown the fire truck as well as the firefighters putting on their gear.

“We want them to know we’re here to help and they can come to us in an emergency,” Davison said. “Their parents might not be able to reach them in the event of a fire, so we don’t want them hiding in a closet, so make sure they know how to be loud and close their doors, so that they block the fire if they can’t get out of their house.

Davison said Wednesday was one of the lighter parts of being a firefighter.

“The whole ride their eyes were lit up and I could see their smiles even behind their masks, they were so excited,” Davison said.

Karli’s mother, Amber, said that was all Karli and her brother had been talking about since October. She said Wednesday’s experience is one they will always remember.

“I’m just grateful to BFD for allowing them to have this experience, it will be a great memory to treasure forever,” McGee said.

She said the forms were not only a good learning experience for her daughter, but also for mom (her) and dad too.

“Certainly it’s good for us to go back and rethink those plans and make sure the kids are aware of what they’re doing,” McGee said.

The Bloomington Fire Department plans to make the competition an annual tradition for students from both school districts.