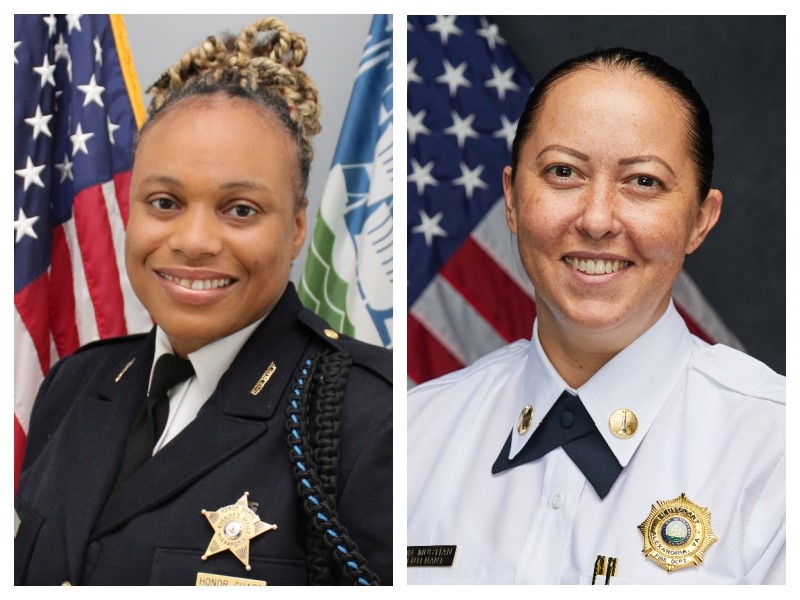 ALEXANDRIA, VA – The American Legion Department of Virginia recently honored two veterans of the Alexandria Fire Department and the Alexandria Sheriff’s Office with state-level awards for outstanding service. Lt. Erin Mustian and Sergeant Cassandra Branch were named Virginia Firefighter/Paramedic of the Year and Law Enforcement Officer of the Year, respectively. Frank Hillyard, the Virginia commander of the American Legion, presented the awards July 16 at the Hilton Washington Dulles during their annual convention.

Sheriff Sean Casey and several colleagues and family members of Sergeant Branch were present when she received her award. Fire Chief Corey Smedley was honored to accept Lt. Mustian’s award on his behalf.

Both honorees have distinguished themselves throughout their careers while providing guidance and training to those with whom they serve. Additionally, both are role models in the community and are active in youth outreach and public safety education efforts.

Since joining the sheriff’s office in 2004 as a deputy, Sergeant Branch has taken on specialized assignments and positions beyond her basic duties. These include being a Field Training Assistant, being a longtime member of the award-winning Honor Guard, and serving on the Sheriff’s Employee Advisory Committee, first as a member and eventually to become president in 2017. She also achieved elevations to Master Deputy before being promoted to sergeant earlier this year.

Sergeant Branch genuinely cares about others, whether they are members of the community, colleagues or those in our care. She has a degree in social work and has experience in crisis intervention and American Sign Language. She uses her skills to communicate effectively with people, especially those going through a difficult time.

Beyond his contributions to the sheriff’s office, Sergeant Branch has had a significant impact in the wider community. In her spare time, she is involved with organizations and programs that help those who are blind or visually impaired, helping behind the scenes and teaching exercise classes to those with vision loss.

Lt. Mustian began his career with the Alexandria Fire Department in 2011 as a firefighter and later transitioned to paramedic after successfully completing the Advanced Life Support (ALS) course and gaining the confidence of the Operational Medical Director (OMD ) of the department.

She was then assigned as a recruit school instructor and eagerly helped new recruits study and develop skills essential to their success. Even after being promoted to lieutenant in 2019, she mentored several firefighters to help them grow professionally. She also invested in her own growth, taking instructor courses and officer development courses for her own development and for the benefit of others.

Currently working as Acting Captain of EMS Training, her responsibilities include maintaining the certification of the department’s basic care and ALS providers, including scheduling required continuing education and sourcing instructors for each topic. In this role, she regularly participates on the department’s EMS Quality Management System committee and helps identify department training needs based on trends in patient care and documentation. She also focuses on keeping all EMS Instructors up to date in their certifications with high quality, hands-on training and she is also responsible for supervising the Lt. ALS Internship/SimLab Coordinator to ensure the development of new ALS providers.

Sheriff Casey and Chief Smedley thank Alexandria American Legion Post 24 for honoring both women with local awards earlier this year and nominating them for state-level awards.