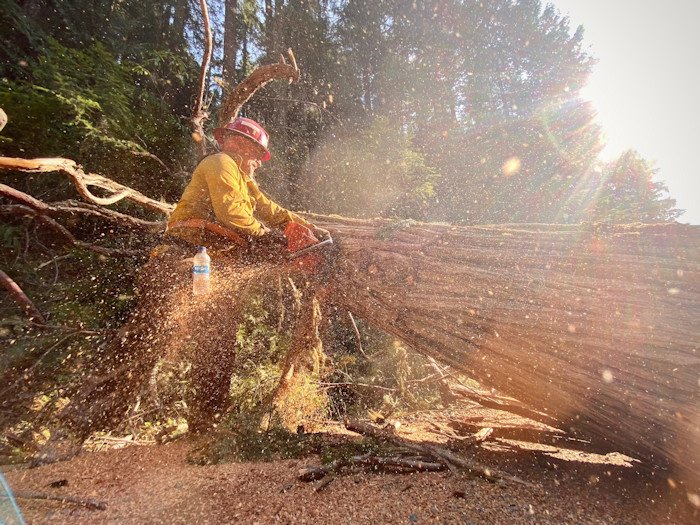 OAKRIDGE, Ore. (KTVZ) — Two months after being ignited by lightning, the Cedar Creek Fire has burned more than 120,000 acres and has reached 27% containment by a waning force of more than 1,000 firefighters.

A change in wind direction contributed to increased fire activity and gusts from the east pushed smoke across the fire towards the community of Oakridge and surrounding areas. This easterly wind is expected to continue and increase over the weekend. Unlike the east wind event several weeks ago which generated extreme fire behavior, this east wind is accompanied by cooler temperatures, higher relative humidity and, thanks to the efforts of firefighters, with a reduced fuel load.

West Zone Operations: Yesterday, crews and heavy equipment continued work to repair areas that have been disturbed by firefighting activities along the northern edge of the blaze. A task force of firefighting resources will be engaged along the southwestern edge of the fire where there is an uncontained line of fire that could be tested by wind conditions and rising temperatures. Poor air quality in the Highway 58 corridor, Oakridge and adjacent communities is expected to persist through the weekend. Temperature inversions will trap smoke in valleys and drainages during the morning and afternoon hours. For air quality resources, see the links below.

East Zone Operations: The cool, rainy weather has dissipated, giving way to an easterly wind. The easterly winds will be more moderate on the eastern side and will begin to ease overnight. The remaining fuels are dry enough for the creeping and smoldering fire behavior to resume, but the winds will not be strong enough to cause the fire to spread. Due to the stronger easterly winds on the west side, an east side task force will be loaned from the west side. East side crews continued to chip, chew, remove debris and other heavy equipment operations. Crews were able to begin moving to repairing the deletion. The removal of all structural protection at Cultus Lake was completed yesterday. Crews continued to repair roads and other infrastructure, including damage identified yesterday on a road near Lake Odell.

Time: Rising temperatures and gusty easterly winds are expected throughout the weekend. As the warming and drying trend continues, relative humidities will continue to decline. Sunday will remain hot and dry, but the winds will begin to ease and shift to the west.

Closures: Deer season opens today. Deschutes National Forest and Willamette National Forest both have closures and fire restrictions in effect. Some of these closures will remain in effect until areas that have been heavily affected by the fire are surveyed for safety risks. Please respect forest closures. Violations of these prohibitions are punishable by a fine of up to $5,000.00 for an individual or $10,000.00 for a corporation or imprisonment for up to six months or both. 16 USC § 551 and 18 USC §§ 3551, 3559, 3571, and 3581. Please visit Willamette National Forest and Deschutes National Forest for the most recent closure orders and maps. The Incident Command Post was established in the Oakridge Industrial Park along with a firefighter camping area near the Hills Creek Dam. This area is used by firefighters and closed to the public. A temporary flight restriction (TFR) is in place. The use of drones is prohibited in the fire area, please secure the use of aircraft by our firefighters on the fire. Pacific Crest Trail hikers should visit pcta.org for up-to-date information.

Smoke: For current conditions, see Fire.airnow.gov, oakridgeair.org and LRAPA – Today’s Current Air Quality. Smoke forecasts are available at https://outlooks.wildlandfiresmoke.net/outlook.
Evacuations: An updated evacuation zone map is available at www.LaneCountyOR.gov/CedarCreek. Sign up for emergency mobile alerts by going to oralert.gov. Please check with the Lane County Sheriff’s Office at 541-682-4150 and the Deschutes County Sheriff’s Office at 541-693-6911 for updates and changes.